Boston Herald Knows Where IndyCar Is Driving Next

Or maybe it doesn’t.

When the Not So Grand Prix of Boston crashed and burned on Friday, the Globe’s Mark Arsenault reported this in Saturday’s edition:

IndyCar race in Boston screeches to a halt 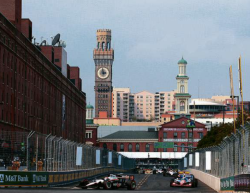 “The relationship between us and the city is not working,” said John Casey, president of what had been called the Grand Prix of Boston, in a Globe interview Friday. “The relationship is untenable.” . . .

Instead, the promoters will turn to Plan B and try to hold a Labor Day race in a backup city in the Northeast, Casey said. The promoters have had contact with two other cities, he said, one of which is in New England.

“They are both willing to do it without the headaches of Boston,” he said, declining to name the cities.

Mayor Martin J. Walsh was behind the wheel of the Grand Prix of Boston and got burned by its fiery crash, ignoring a series of repeated wrong turns and warning signs that the race would never get off the starting line.

Walsh’s administration spent a year pushing an idea that seemed ludicrous to many Bostonians: hosting a high-speed IndyCar race in a city that can’t even fill potholes or sync up its traffic lights.

No kidding – it’s like Joe Cocker has timed the traffic lights in Boston.

Casey gave all the race vendors, consultants and attorneys a similar brusque sendoff, writing: “Thank you for your work. Pencils down” — another way of saying: I’m not paying you any more.

Then Casey let it be known he was taking his speedy race cars to a city that really wanted them: Providence.

Chalk up one more checkered flag for the racy local tabloid.

Today’s Herald spins out a bit.

Casey and his group now will look for another city to host the race. Providence has for years been rumored to be on the verge of an agreement to host an IndyCar race.

Though Emily Crowell, spokeswoman for Providence Mayor Jorge Elorza, said nothing has been finalized.

“IndyCar has not applied for any permits or made arrangements to relocate the race yet,” Crowell said, “but we’re open to having a conversation to see if Providence is the right fit for  their event.”

Sounds like Providence is about to have a Hub of a time with the Little Indy That Couldn’t, eh? 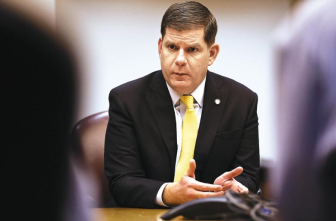 From our No Credit Where Credit’s Due desk

Once again the Boston Globe has slipstreamed the Boston Herald’s coverage of the sputtering Grand Prix of Boston, which hopes to take place this Labor Day weekend. 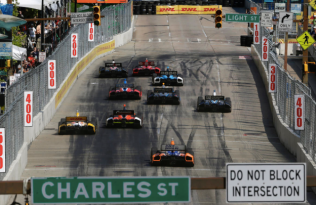 In another potentially serious setback to the Boston Grand Prix, a little-known city commission has blocked IndyCar race promoters from building parts of the course because of new climate change rules that require them to get a wetlands permit.

The 4-1 vote by the city’s Conservation Commission is the latest unexpected roadblock to the race, which has faced tough scrutiny from residents and a monthslong review from the city and state that put the Labor Day event in jeopardy.

Mayor Martin J. Walsh said Friday that he is optimistic IndyCar race organizers would be able to hold their event in South Boston in September, despite new environmental concerns raised by the Boston Conservation Commission.

“I’m hoping to see it here Labor Day weekend,” Walsh told reporters at a morning event. “I think there’s a process now they can follow, and I think they have to follow that process and make their case.”

In a 4-to-1 vote this week, the commission, which has responsibility for protecting wetlands in the city, concluded that the route planned for the race travels through a 100-year flood zone, and that organizers had to apply for permits that consider the potential environmental impact of any construction.

Nowhere does the Globe piece acknowledge that the Herald drove there first.

And this isn’t the only time the lately local broadsheet has drafted off the firsty local tabloid.

C’mon, Globeniks: Be a mensch, eh?

Give Joe Battenfeld and the racy local tabloid their due: They’re not downshifting their efforts to total the proposed Grand Prix of Boston, maybe the second-worst idea Mayor Marty Walsh has had in office. (Store 2024 – c’mon down!) 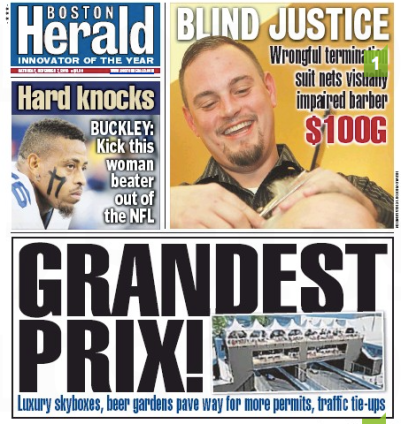 Life in the IndyCar fast lane

A 47-page “Stakeholders Info Deck” from the Grand Prix of Boston, obtained by the Herald, is targeting young, smartphone-wielding, rich professionals.

Not, we might add, the Boston Herald readership. The young, smartphone-wielding, rich professionals do, however, read the Boston Globe, which is still drafting in second place. 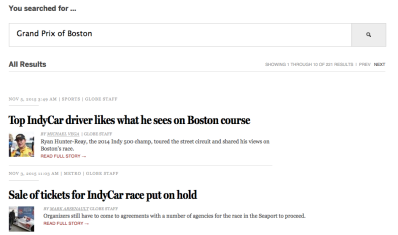 And round and round we go.

Man, that’s some serious road rage over at the Boston Herald.

Today the revvy local tabloid is back at it.

The type of Grand Prix racing poised to roar through Boston’s streets next year has forced other host cities to inject taxpayer money to keep the motors running — in one case up to $4 million — spotlighting the challenges the Hub faces in avoiding a big public tab for the event, the Herald has found.

“These events do require capital, like any other type of sporting event or facility, and the onus is on the event promoter to be able to make the event work … from a promotional aspect, from an operational standpoint and also as a neighbor,” said Tim Frost, a Chicago-based motorsports business consultant.

“There is a really big economic event in there,” Frost said, and how they’ll avoid tapping public funds is “a very valid question.”

Residents of a condo complex on the South Boston Waterfront are challenging efforts to turn their street into part of Boston’s first IndyCar race.

In a 14-page letter sent to Mayor Martin J. Walsh on Tuesday, a lawyer representing the Seaport Lofts Condominium Association raised a number of legal issues with the race.

Among them: the allegation that the city improperly negotiated a contract with event organizer Grand Prix of Boston without going through the proper public review.

The condo residents’ goals include blocking the race, scheduled to take place during Labor Day weekend next year, or forcing it to be moved.

But nothing about the hosing taxpayers might get from the five-year event.

Both local dailies, however, are drafting on David Bernstein’s major takeout in Boston magazine three months ago.

Is the Grand Prix Taking Boston for a Ride?

Since Boston is already mired in a mud fight over whether or not the city can afford to host the 2024 Olympics, you might think Mayor Marty Walsh would be reluctant to take on any big, new, public sporting events. Not so. In mid-May, without public hearings, Walsh signed a Memorandum of Understanding with the Grand Prix of Boston, clearing the way for the city to host five annual IndyCar road races on the South Boston waterfront, each Labor Day weekend from 2016 to 2020. Speaking by phone on Tuesday, Walsh compared the Grand Prix to the Tall Ships display, which returns to Boston in 2017. “The economic opportunity is something that made me interested in it,” he says.

It’s an interesting comparison, given Boston’s wild, sometimes comical, occasionally acrimonious disagreements about the economic value of the Tall Ships over the past 25 years. Those events either brought close to $1 billion to greater Boston, or were a net loss, or anywhere in between, depending on whom you ask.

Bernstein proceeds to chronicle, in eye-popping detail, the financial burdens the Grand Prix has imposed on other IndyCar cities. If it’s not the definitive piece on this topic, it’ll do until something better comes along.