The Maine event in today’s local dailies is the client list of one very busy Zumba dance instructor in Kennebunk.

Boston Herald Page One (via the Newseum’s Today’s Front Pages):

KENNEBUNK, Maine — With equal parts dread, gallows humor and gawking curiosity, residents of this bucolic seaside burg are sitting on the edge of their seats waiting to see if any of their neighbors are among the more than 150 men accused of paying a Zumba dance instructor for sex.

“You’re familiar with ‘The Scarlet Letter’? This is the same thing, only now it’s the letter Z for Zumba,” said Gisele Nedeau, who runs Ashby’s Deli with her husband, Mark.

Police yesterday had planned to publish the names of some of those summoned to court in connection with the alleged prostitution racket that authorities said was run by 29-year old Alexis Wright of nearby Wells, and her business partner, Mark Strong Sr., 57, of Thomaston.

But some desperate last-minute maneuvering by a lawyer for two of the men has delayed the release until at least Monday — the earliest the state’s highest court could hear the case.

The Boston Globe also features the story Page One – Metro – but with a much more subdued headline:

KENNEBUNK, Maine — Most years at this time, when the tourists have left and the snowbirds are not far behind, this quaint coastal town begins to wind down for the winter.

But this fall, the pleasant, proper village down the road from the Bush family compound in neighboring Kennebunkport has been gripped in scandal. A scandal, shall we say, of prurient interest.

A scandal, if you must, involving a fitness instructor who is charged with running a prostitution operation from her studio. And a list, which in recent gossip-fueled days has taken on near-mythic status as “the list” of the Zumba teacher’s exten sive clientele.

“This is a very small town after the season,” said Elaine Nicholson, 54. “Except this year. This year, every body’s buzzing.”

The Globe piece is more substantial than the Herald’s, but each has its unique attractions.

Such as the Globe’s inclusion of  Kennebunk’s town slogan:

In town, where a sign at the bridge hails the town as “the only village in the world so named,” the list of names and their uncertain fate was front and center.

And such as this photo in the Herald: 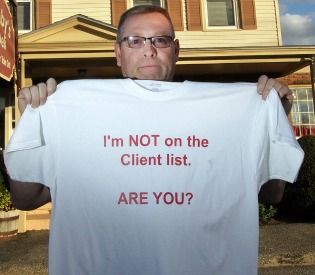 Oh, yes – and the comments in the Herald are more numerous – and more nasty – than those in the Globe.

This entry was posted on Saturday, October 13th, 2012 at 6:10 pm and is filed under Uncategorized. You can follow any responses to this entry through the RSS 2.0 feed. You can leave a response, or trackback from your own site.