Boston Herald’s Inside Track ‘Throne’ for a Loop

Well, this is not encouraging.

In the course of the evening, Morton’s attention turned to the subject of his next book: Meghan Markle, Prince Harry’s fiancée.

As it appeared in the print edition: 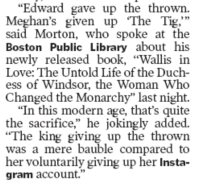 Really? “Gave up the thrown”? Twice?

Earlier today it was the same in the online version.

“Edward gave up the thrown. Meghan’s given up ‘The Tig,’ ” said Morton, who spoke at the Boston Public Library about his newly released book, “Wallis in Love: The Untold Life of the Duchess of Windsor, the Woman Who Changed the Monarchy” last night.

“In this modern age, that’s quite the sacrifice,” he jokingly added. “The king giving up the thrown was a mere bauble compared to her voluntarily giving up her Instagram account.”

But now it’s been fixed.

“Edward gave up the throne. Meghan’s given up ‘The Tig,’ ” said Morton, who spoke at the Boston Public Library about his newly released book, “Wallis in Love: The Untold Life of the Duchess of Windsor, the Woman Who Changed the Monarchy” last night.

“In this modern age, that’s quite the sacrifice,” he jokingly added. “The king giving up the throne was a mere bauble compared to her voluntarily giving up her Instagram account.”

To be sure, it’s just one little mistake, so why make a federal case out of it, right?

It does make one wonder, though: Can the shaky local tabloid really afford to lose 25% of its already skeletal staff, as new owner Digital First Media plans to do? 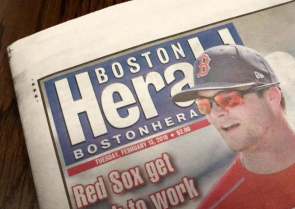 Who Knew the Boston Herald Was Worth $12 Million?

Eat your heart out, Mort Zuckerman.

Back in September, the real estate magnate sold the legendary New York Daily News to Tronc (rhymes with bonk) for exactly $1 – 50¢ less than the price of the paper’s Sunday edition.

To be fair, Tronc did assume $30 million in operational and pension liabilities, but hey – a dollar’s a dollar, yeah?

Boston Herald owner Pat Purcell, on the other hand, scooped up a helluva lot more in yesterday’s bake sale of the shaky local tabloid.

From Brian Dowling’s piece in today’s edition of the soldy local tabloid: 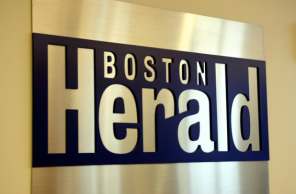 Digital First Media won the Boston Herald in a 5-hour bankruptcy auction with a top $11.9 million bid that all but settles who will carry the news organization into the next chapter of the city’s media history.

The newspaper company, which operates as Media News Group and owns hundreds of publications across the country, including the Denver Post, bested two other suitors — GateHouse Media and Revolution Capital. Digital First also owns the Lowell Sun and the Fitchburg Sentinel & Enterprise in Massachusetts.

But that doesn’t mean it’s all roses and lollipops at Fargo Street. As the Boston Globe’s Jon Chesto reports, Digital First Media “has earned a reputation for relentless cost-cutting” – not a good omen for the Herald rank and file.

And, as our kissin’ cousins at One-Daily Town recently noted, Digital First just ditched the Sentinel & Enterprise’s brick-and-mortar home for a “virtual newsroom.”

So maybe you Heraldniks might want to bring some of your personal items home.

Despite the Boston Globe’s delivery discombobulation yesterday, the hardreading staff was nonetheless remiss in failing to point out this ad in the lately local broadsheet’s Sports section. 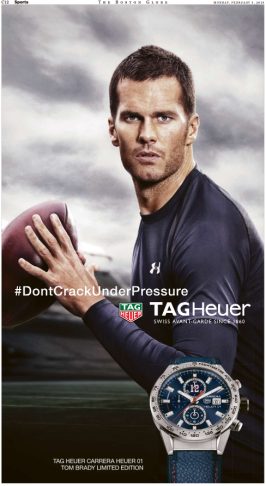 As the hardreading staff noted the other day, the Boston Herald has of late increased the amount of its “sponsored content” while decreasing the legibility of its disclosure.

Now the Boston Globe apparently wants to join the stealthy local tabloid in profiting from ads in sheep’s clothing, running this on A12 of today’s edition. (Here’s the digital version on the Globe website.) 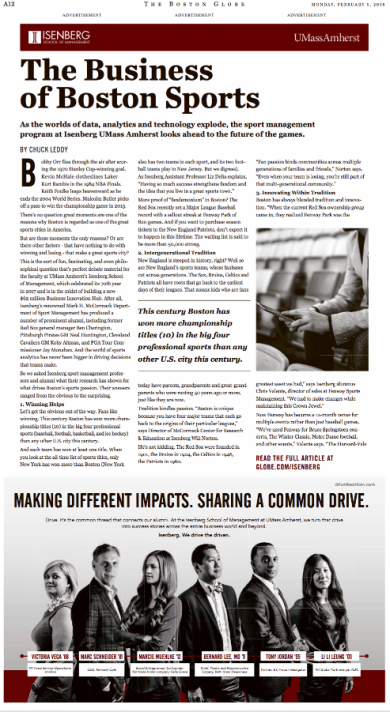 To be sure, sharp-eyed observers will pick up that it’s actually an ad, but not everyone is as perceptive as you, splendid reader. For some, anything with a headline and a byline qualifies as editorial content. Which is exactly what stealth marketing counts on.

Regardless, we’re guessing that the revenue-impaired Globe and the bankrupt Herald will increasingly turn toward this sleight-of-ad as time goes on.

We hope, of course, to be proven wrong.

As the hardreading staff thumbed through its Boston Sunday Globe this morning, we couldn’t help but notice this double-truck ad in a special section called The Greater Debate, subhead “Who’s more responsible for this Patriots dynasty: Brady or Belichick?” 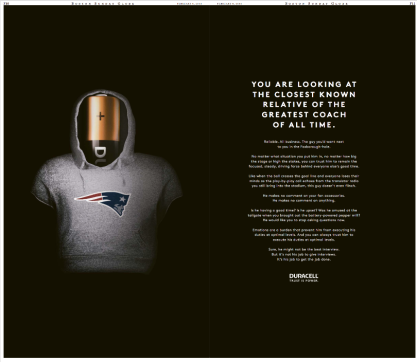 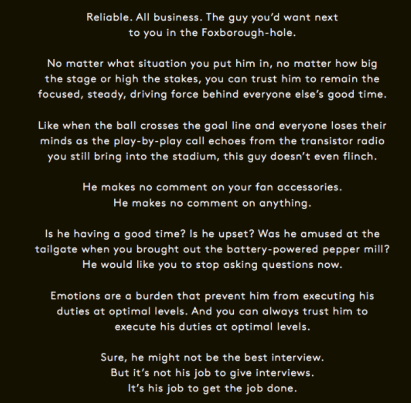 Notice that nowhere in the ad do the words “Bill Belichick” appear. But he’s there in every line, right? (Clever, that “Foxborough-hole,” eh?)

Which got the headscratching staff to thinking – are they paying Belichick? Or is this just an end-around?

So we hied ourselves to the Googletron and learned that this campaign has been in the news for several days now, both the print campaign and this TV spot.

That ad will air just before kickoff tonight. As far as we can tell, Belichick is not being paid.

Is he happy about this? Is he upset? Is he amused at the creativity displayed by ad agency Wieden + Kennedy?

Would he like us to stop asking questions now?

Who cares?  We want answers.

As the hardreading staff has noted on multiple occasions, the Boston Herald’s publication of stealth marketing (a.k.a. “sponsored content”) has steadily become more and more – ah – stealthy, as the labeling of same grows smaller and smaller.

For example, here’s how sponsored content for intimate apparel retailer Rigby & Peller was labeled in March of 2016. 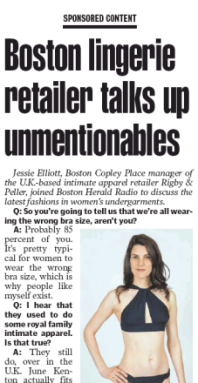 Then there’s this advertorial for the Massachusetts State Lottery from a year ago.

And now comes this from yesterday’s edition of the stealthy local tabloid. (Inexplicable Little Green 1 at no extra charge.)

Do we detect a pattern emerging here?

All of those ads in sheep’s clothing originated in interviews on Boston Herald Radio, which has up to several listeners but which more importantly provides the Herald with a steady stream of stealth marketing opportunities.

Given the Local Dailies DisADvantage the thirsty local tabloid labors under, that just might be the best it can do.