What’s This? The Herald Track Gal (Without Laura!)

From our Late to the Going-Away-Party desk

The hardreading staff yields to no man in its admiration for the Boston Herald’s Track Gals (without Megan!). But this is too much.

From yesterday’s Boston Herald Inside Track:

Veteran Herald writer Laura Raposa, longtime co-columnist with Gayle Fee of the paper’s popular Inside Track, has announced that after 30 years with the paper and 21 years co-writing the daily column, she will be leaving the paper March 8 to focus on cooking, historic preservation and independent writing projects. Raposa, an accomplished cook and baker, said that “leaving the Herald, where I have worked my entire adult life, is bittersweet.”

“I will miss the Herald as well as my colleagues, many of whom are like family, especially my partner Gayle Fee,” Raposa said. “At the same time, I am excited by the prospect of pursuing my passions and interests outside of daily journalism while continuing to write.”

Hey, Gayle Fee (a.k.a. the Track Gal): The hardreading staff is always available for consultation.

Congressman Joe Kennedy gave a pat on the back to a bunch of nonprofits at a gathering hosted by the Highland Street Foundation. Attendees included Regina Snowden of Partners for Youth With Disabilities,Sana Fadel of Rosie’s Place, Boys & Girls Clubs of Boston CEO Josh Kraft, Joe Abely of the Carroll Center for the Blind, Girl Scouts of Eastern Massachusetts CEO Ruth Bramson, and Highland Street Foundation trustee Holly McGrath.

Yeah – a left-handed pat on the back.

Hey, Namesniks: The guy has his right arm in a sling. You don’t mention that?

(Then again, the hardsearching staff hasn’t found any mention of it elsewhere either. So . . .  whatever.)

The hardreading staff doesn’t know what they’ve done with the real Boston Herald, but here’s how it looks today:

Seriously. And here’s the feature story:

Born a girl but identifying as a boy, Donnie Collins has found his band of brothers in the unlikeliest of places — a college fraternity.

It’s turned into a social media sensation for the 20-year-old sophomore.

“I never thought of myself as a person who could join a fraternity,” said the screenwriting major. “I just remember thinking, ‘I’ve never seen so many people in one room that I wanted to have in my life.’ ”

Interestingly, that dollar figure in the headline is up almost $3,ooo from the print edition:

No acknowledgement of that update in the web story. We guess one change was about all the Herald could handle.

(See here for some of the media outlets that had this story before the feisty local tabloid.)

From our Late to the Poopy desk

Yesterday the hardreading staff noted the Lil Poopypalooza at the Boston Herald:

What we failed to note was the corresponding Boston Globe coverage of the Poopyfuffle:

Brockton police have filed a child abuse and neglect complaint against the father of Luie Rivera, a 9-year-old Brockton boy who raps under the name Lil Poopy, an officer said Monday.

Rivera, a member of the rap group Coke Boys, stars in several online rap videos, such as “Coke Ain’t a Bad Word,” in which he is shown gambling and engaging in sexually suggestive activity with adult women.

Lieutenant William Hallisey said Brockton police petitioned the Department of Children and Families to investigate Luis Rivera, the boy’s father, for child abuse or neglect in relation to the videos.

That’s all you need to know about the difference between to two local dailies.

Today’s Boston Herald gets all Whitmanesque celebrating itself and singing itself while delivering the straight poop on nine-year-old rapper Smallie Bigs – sorry, Lil Poopy.

Start at the top of Page One: 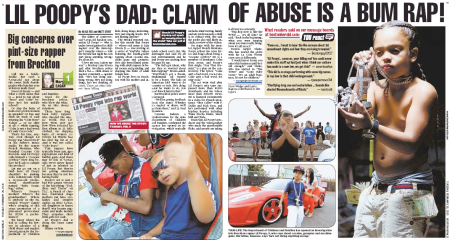 Customary pat on the back for the feisty local tabloid’s previous coverage: 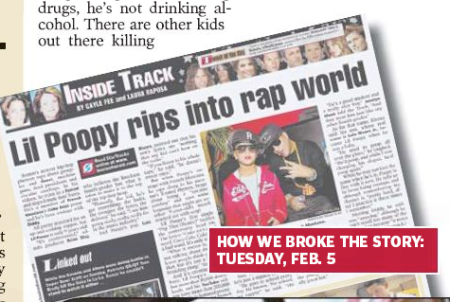 Stop the presses! The Schadenfreude Gazette has actually stipulated to the facts about the imminent sale of crosstown rival Boston Globe.

From today’s edition of the feisty local tabloid:

Rupert Murdoch has ‘no interest’ in the Boston Globe

“Emphatically, no,” Murdoch said when buttonholed on the red carpet at the Academy Awards on Sunday night, according to a tweet by Variety’s deputy editor Cynthia Littleton.

Of course, the only “talk of bid” that needed to be quashed appeared in – wait for it – the Herald, which resolutely ignored the reality that federal cross-ownership rules prohibit Murdoch from owning a television station (Fox 25) and a newspaper (the Globe) in the same market (Boston).

But  why get technical about it.

After all, it’s the Herald.

Let’s skip over Howie Carr’s bulk-mail offering (“I have next to nothing in common with the pampered pukes of Morrissey Boulevard — I went to a state college, I’m not in the Social Register, I don’t have a trust fund, I wasn’t born and raised on Park Avenue, I never summered in the Hamptons” blah blah blah) and go right to the alleged news report.

But, in retrospect, it’s only right to address Carr’s knee-jerk (accent on jerk) attack on the stately local broadsheet.

First off, the “state college” Carr attended was the University of North Carolina, “not exactly Dartmouth State” as one splendid commenter noted.

Beyond that, Carr fails to mention his high school days at Deerfield Academy, not exactly Charlestown High.

But more importantly, consider what the “pampered pukes” published on Page One alone of the Boston Sunday Globe: 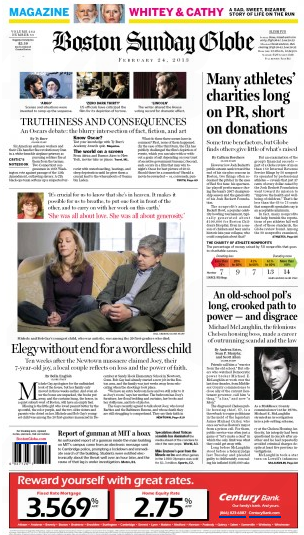 Some true benefactors, but Globe finds others give little of what’s raised

Elegy without end for a wordless child

Ten weeks after the Newtown massacre claimed Joey, their 7-year-old joy, a local couple reflects on loss and the power of faith.

Michael McLaughlin made a career of skirting laws

The felonious Chelsea housing boss outran scandal and the law

That’s more serious reporting in one day than the Herald does in a month – or Carr does in a year.

Enough with playing to the cheap seats, Howie. You used to be a good, tough reporter. Do an honest day’s work for once, yeah?

The Schadenfreude Gazette is so desperate for new ways every day to bash the Globe over its impending sale, the feisty local tabloid is willfully ignoring reality just to get in some cheap shots. Today’s case in point (no idea why the “1” is upper right, but couldn’t get rid of it):

Let’s skip over Howie Carr’s bulk-mail offering (“I have next to nothing in common with the pampered pukes of Morrissey Boulevard — I went to a state college, I’m not in the Social Register, I don’t have a trust fund, I wasn’t born and raised on Park Avenue, I never summered in the Hamptons” blah blah blah) and go right to the alleged news report.

Media tycoon Rupert Murdoch, reported to be on The New York Times Co.’s shortlist of suitors for its Boston Globe, would be a bargain hunter looking to get the Hub newspaper on the cheap from his archrival at the Times, who in turn could use the News Corp. chairman’s bid to drive up the price of other offers, according to media analysts.

“The perception is that Rupert is the leading buyer of newspapers in the country if not, I suppose, the world. So obviously … if you are selling a newspaper, you certainly want him in the action,” said Vanity Fair contributing editor Michael Wolff, author of “The Man Who Owns the News: Inside the Secret World of Rupert Murdoch.”

This is just refried slop from yesterday’s edition, complete with quotes from the reptilian Michael Wolff. It also recycles this piece from the Wall Street Journal:

The Wall Street Journal, which Murdoch’s company bought from the Bancroft family for $5 billion in 2007, cited sources in reporting Friday that the Times Co. is “hoping to draw a bid” from Murdoch — even as the Times has been in talks with another potential buyer who submitted a  $100 million bid last month.

Problem is, they forgot to crib the most important part:

News Corp.’s ownership of a television station in Boston would rule out purchase of the Globe, given regulatory rules that prohibit companies owning a newspaper and a TV station in the same market, said a person familiar with the situation.

But hey – why let facts get in the way of a good poke in the competition’s eye, eh?

The print edition of The Schadenfreude Gazette has arrived at the Global Worldwide Headquarters of Two-Daily Town, so here’s a better look at today’s offerings:

The hardreading staff previously noted the feature story. A taste of the others:

‘Sorry for the way this unfolded. It was not our intention,’ says @nytimes about being scooped on its plan to sell @bostonglobe . . .

With a for-sale sign planted outside the Boston Globe, would-be media moguls of every stripe were set free this week to sketch their plans for a bold entry into the New England media landscape.

All they needed was $100 million, give or take.

“I would buy the Globe in a heartbeat if I had the money,” said George during yesterday’s Friday Throwdown news chat. “And I would take the editorial page from far left to common-sense middle of the road.” . . .

And – THIS JUST IN from the feisty local tabloid’s website (picked up from the Wall Street Journal):

The New York Times Co. is pushing for a deal for the Boston Globe with media mogul Rupert Murdoch, but has also received a bid for the beleaguered broadsheet for more than $100 million, the Wall Street Journal reported.

The bid came from Rick Daniels, a former Gatehouse Media New England president and ex-Globe executive, and private equity firm Boston Post Partners, represented by managing director Heberden Ryan, the Journal said. The Herald first reported that Boston Post Partners has long been a key player in the sale of the Globe.

Of course, current FCC regulations prohibit cross-ownership of a TV station and newspaper in the same market, and it’s unlikely Murdoch would trade Fox 25 for the Globe.

Meanwhile, crosstown at the stately local broadsheet, there’s this in today’s print edition, back on Metro B5:

New York Times Co. vice chairman Michael Golden told Boston Globe employees Friday that the company has a duty to seek the highest bidder in a sale but aims to leave the newspaper in responsible hands.

“We have no intention to send the New England Media Group to the slaughterhouse,” he said in one of three town-hall style meetings with employees.

Golden came to Boston to discuss the Times Co.’s plan to sell the Globe, the Worcester Telegram & Gazette, and their related websites. In the meetings, he made no promises about what kind of suitors the Times Co. would consider.

When asked by the staff whether the Times Co. has a duty to find “a good steward of New England’s largest newspaper,” he replied “we will take what we consider to be the best bid.”

Another day, another dolor for the Boston Globe.

As gleefully recorded by The Schadenfreude Gazette:

“I grew up not only reading the Boston Globe but doing business with the Boston Globe,” Boch told the Herald yesterday after throwing his hat in the ring. “I feel it has lost its way over the last few years. I feel I have the right recipe to put it back on track.”

But – to stick with the automotive theme – it’s just as likely the Times Co. will sell to a private equity firm that will strip the Globe for parts like a car left overnight on the Cross Bronx Expressway.