As the hardreading staff unfolded its Boston Sunday Globe yesterday, we encountered this notice at the bottom of Page One.

We also encountered this 68-page magazine nestled inside the paper.

Must be an advertising supplement for Boston Children’s Hospital, we thought, given its relentlessly sunny-side-up Table of Contents.

But, actually, the magazine was produced by Boston Globe staffers.

It’s one puff piece after another, interspersed with dozens of costly congratulatory ads.

But no mention in those 68 pages of the hospital’s wanton destruction of the beloved Prouty Garden, or the battle over the hospital’s questionable expansion to service a projected – but by no means assured – international clientele.

To be clear, this isn’t the first time the Globe has played footsie with BCH. As we previously noted:

This is getting really flagrant.

As the hardreading staff has noted multiple times, the Boston Globe has put on a full-court press over the past week promoting the proposed expansion of Boston Children’s Hospital.

Last week it was an op-ed piece from former Massachusetts Taxpayer Foundation president Michael Widmer urging state officials to get off their duffs and approve the expansion, already. Problem was, the Globe failed to mention that Widmer sits on the hospital’s Board Committee for Community Service.

On Sunday, this Globe editorial urged the state’s Public Health Council to approve the project.

Not to mention the Globe’s accepting full-page ads from Children’s as it supported the hospital’s expansion on its Business pages and providing op-ed space for BCH president and CEO Sandra Fenwick to plead her case unopposed by dissenting points of view, of which there have been many.

To be fair, newspapers routinely produce vehicles largely designed to draw advertisers. This one just seems a little, well, germy.

The hardreading staff has diligently chronicled the Boston Herald’s tendency to turn publicity material into editorial content (see our ongoing series Hark! The Herald! for details of the selfie local tabloid’s puffery).

But, truth be told, the Boston Globe is not immune to that same temptation. As we noted not long ago, “the Boston Globe has lately done its share of self-promotion as well. There was all the hubbub in the newshole last month over the paper’s HUBweek festival, and this wet kiss for ‘Globe Live’ in the Names column last week.”

Rather than make poor Andy Rosen “report” your press releases, why not promote HubWeek the same way you do the GlobeDocs Film Festival?

It’s not just that the headline on this piece in yesterday’s Boston Globe about outgoing Speaker of the House of Commons John Bercow is so thoroughly tin-eared and obtuse.

Declines to criticize Johnson or Trump 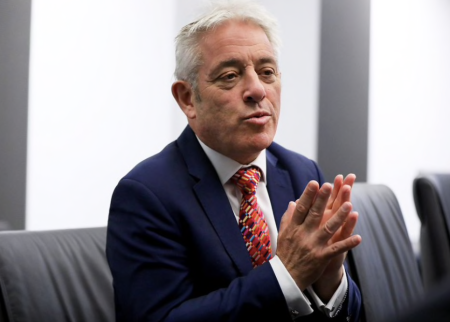 John Bercow, the stentorian speaker of the British House of Commons, wouldn’t take the bait. In an interview Tuesday, Bercow wouldn’t criticize fiery Prime Minister Boris Johnson, whom last week he compared to a bank robber.

The speaker wouldn’t comment on whether he opposes a “no-deal” Brexit, which Johnson has said he is determined to implement Oct. 31, even though the House of Commons last week demanded an extension if no exit agreement is reached with the European Union . . .

“The role of a parliamentary democracy should be preserved, nurtured, and celebrated,” Bercow said. “If we degrade Parliament, we do so at our peril.”

The bigger problem is that the piece lets Bercow get away with that last sentence despite the inconvenient fact that his departure from Parliament is entirely due to his own degrading and bullying of the people around him in that same body.

From Kate Maltby’s New York Review of Books piece last week: “The Speaker’s resignation follows a series of independent reports into a culture of bullying and sexual harassment in the House of Commons—an employment culture that it was his job to regulate. To be clear, there are no allegations of sexual harassment against Bercow personally; there are serious allegations (which he denies) of bullying.”

[T]he flagship BBC news show Newsnight broadcast in May last year allegations that the Speaker was an egregious workplace bully. Among other claims, the BBC reported that Bercow’s private secretary, Kate Emms, was diagnosed with post-traumatic stress disorder after nine months of working for him. (In a petty twist, Emms was removed from the design of Bercow’s official portrait after complaining.)

Not a whiff of any of that in the Globe piece.

To be fair, Globe reporter Brian MacQuarrie can’t be held responsible for the headlines that editors attach to his pieces. But somebody at the Globe should be informed enough to know that John Bercow is not just “stentorian” and “flamboyant” and “a champion of the rank and file.”

Especially when Bercow excoriates “keyboard warriors who think they have a right to berate, harangue, intimidate, or threaten anyone who dares to take a view that differs from their own,” as he did in the Globe piece.

That’s a pretty good description of Bercow himself, according to independent investigators for the House of Commons.

One last note: The headline on Maltby’s NYRB piece is “What the Speaker Bercow Stories Failed to Say.”

Now add the Boston Globe to that roll call. 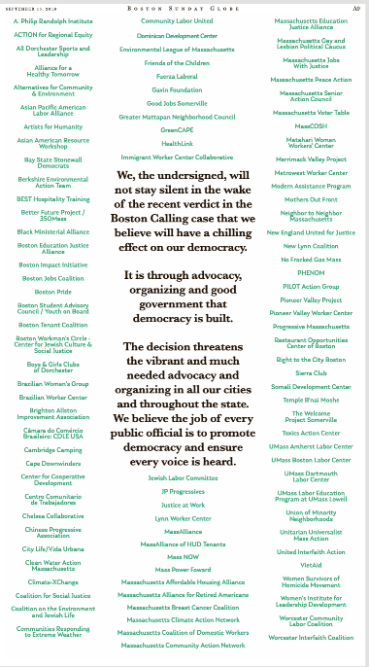 Memo to IBEW Local 103: Next time, just set your money on fire.

Because this time, the local chapter of the International Brotherhood of Electrical Workers spent its dough promoting, well, womanhood with this full-page ad in today’s Boston Herald.

This disclaimer appeared at the bottom of the ad: “Paid for by IBEW Local 103. We are not asking any individual to stop performing any work or services, or to refuse to pick up, deliver, handle, or transport any goods.”

Don’t want to get confused with the recent labor-related mishegas at Boston City Hall, now do we?

Either way, here’s the thing: Does anyone at Wellesley College actually read the Herald?

As for #WhatAboutMeWellesley, a search of that hashtag yields exactly four tweets, the most recent one from June 8.

New memo to IBEW Local 103: If you include a hashtag in your full-page newspaper ad, at least put something there yourselves.