The Essential Difference Between the Boston Globe and the Boston Herald

Both Sunday dailies have reports on the Boston taxicab industry, and the difference between them tells you all you need to know about the two news organizations. 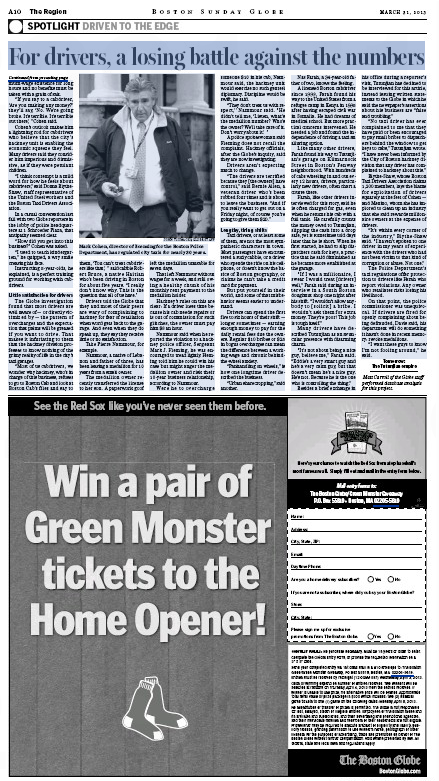 And that’s just the first of three parts.

Once again, the Herald is a lively index to the Globe.

Don’t get the hardreading staff wrong: We yield to no man in our appreciation of the feisty local tabloid. Hell, we’re one of its 17 home subscribers.

But it’s always good to remember what’s what with the Boston dailies.

From our Bitter Disappointment desk

For months the Boston Herald has been the hardreading staff’s Zumba Hooker Headquarters.

When Alexis Wright, the pride of Maine’s hooker community, pled guilty to 20 counts of prostitution and etc. on Friday, it was only the Boston Globe that recorded it.

PORTLAND, Maine — A dance instructor accused of using her Zumba fitness studio as a front for prostitution pleaded guilty Friday to 20 counts in a scandal that captivated a quiet seaside town.

The agreement that followed a second day of plea negotiations on Friday spares Alexis Wright from the prospect of a high-profile trial featuring sex videos, exhibitionism, and pornography. Prosecutors will recommend a jail sentence of 10 months when she is sentenced on May 31.

Wright quietly answered ‘‘guilty’’ 20 times when the judge read the counts, which include engaging in prostitution, promotion of prostitution, conspiracy, tax evasion, and theft by deception.

‘‘We’re very satisfied with it. It’s an appropriate outcome, given the gravity of her actions,’’ Assistant Attorney General Darcy Mitchell said after the brief court hearing.

But the hardbreathing staff is not at all satisfied with it, since Saturday’s Boston Herald featured exactly nothing about the “appropriate outcome.”

Sure, our feisty local tabloid played catch-up with this Associated Press report on its website, but really, Heraldniks:

Beaten by the Globe on the Zumba Hooker beat?

You CAN Judge a Daily by Its Cover

From our Compare ‘n’ Contrast desk

The front pages of today’s local dailies are perfect representations of where they stand in relation to one another – and their readers. 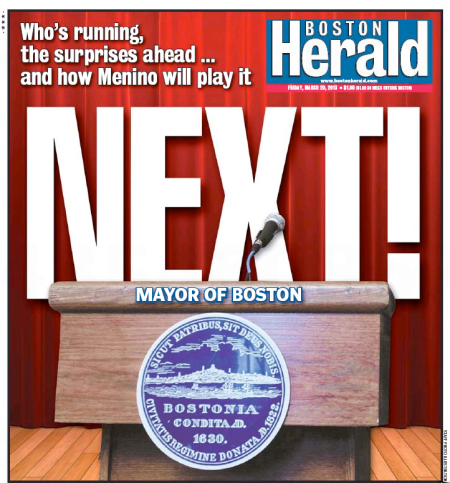 That tells you all you need to know about our feisty local tabloid. Long may it rain . . . on all our parades.

Paul Grogan Has to Be Pissed at the Herald

The race for mayor 2013 — the first without an incumbent in three decades — likely will draw a scrum of hopefuls from City Hall to the State House and beyond. You can’t tell the players without a scorecard. Here’s ours: 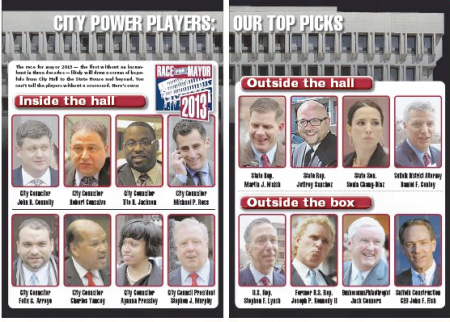 In other words, everybody.

Who at least gets a nod in today’s Boston Globe:

Through a spokesman, Boston Foundation president Paul Grogan said he has no plans to run for mayor.

Yes, and the hardworking staff has no plans for dinner tonight.

The thing is, Grogan’s been waiting in the mayoral wings for about a decade. It’s hard to believe he’ll pass up this golden opportunity to grab the gold ring.

Time will tell, as the bigfoot journalists say.

Supreme Difference Between the Local Dailies

As you would expect, both Boston dailies today report on yesterday’s Supreme Court DOMA hoedown.

A boost for gay marriage: Justices question US law

WASHINGTON — Concluding two days of intense debate, the Supreme Court signaled Wednesday it could give a boost to same-sex marriage by striking down the federal law that denies legally married gay spouses a wide range of benefits offered to other couples.

As the court wrapped up its remarkable arguments over gay marriage in America, a majority of the justices indicated they will invalidate part of the federal Defense of Marriage Act — if they can get past procedural problems similar to those that appeared to mark Tuesday’s case over California’s ban on same-sex marriage.

Since the federal law was enacted in 1996, nine states and the District of Columbia have made it legal for gays and lesbians to marry. Same-sex unions also were legal in California for nearly five months in 2008 before the Proposition 8 ban.

Justice Anthony Kennedy, often the decisive vote in close cases, joined the four more-liberal justices in raising questions Wednesday about a provision that defines marriage as the union of a man and a woman for purposes of federal law.

WASHINGTON — A majority of Supreme Court justices expressed deep skepticism Wednesday about a federal law denying benefits to legally wed gay and lesbian couples, conveying after two days of historic testimony on the institution of marriage a sense that they would declare the law unconstitutional.

During oral arguments over a challenge to the 1996 Defense of Marriage Act, which defines marriage as a union between one man and one woman, Justice Ruth Bader Ginsburg ticked off some of the 1,100 federal benefits the law denies to gay couples who have been legally married in Massachusetts and eight other states: They are not guaranteed family medical leaves, cannot collect spousal Social Security benefits, and cannot file joint federal tax returns and receive a marital deduction.

“With that set of attributes, one might well ask, what kind of marriage is this?” said Ginsburg, interrupting an attorney who argued the law does not violate states’ rights.

As a result of the law’s regulations, Ginsburg added, the nation is left with two classes of marriage: “Full marriage and this sort of skim-milk marriage,” she said, drawing laughter from the packed courtroom.

Same story, different details. What does distinguish the two papers, though, is where they turn for sidebar material.

‘There has been a sea change’

On why President Obama is still enforcing the law if he believes it is unconstitutional (Chief Justice John G. Roberts Jr.):

ROBERTS: If [President Obama] has made a determination that executing the law by enforcing the terms is unconstitutional, I don’t see why he doesn’t have the courage of his convictions and execute not only the statute, but do it consistent with his view of the Constitution, rather than saying, “Oh, we’ll wait till the Supreme Court tells us we have no choice.’’

On the question of whether the definition of marriage should be a federal matter (Justice Anthony Kennedy and Paul Clement, the lawyer representing the House Republican leadership in defending the law):

KENNEDY: You are at, at real risk of running in conflict with what has always been thought to be the essence of the state police power, which is to regulate marriage, divorce, custody.

CLEMENT: First of all, the very fact that there are 1,100 provisions of federal law that define the terms ‘‘marriage’’ and ‘‘spouse’’ goes a long way to showing that federal law has not just stayed completely out of these issues. It’s gotten involved in them in a variety of contexts where there is an independent federal power that supported that.

And there’s more where those came from – Beyoncé, Ben Affleck, Joe Kennedy 3.0, and etc.

Check it out for yourself.

So Boston Mayor Tom Menino will not run for a sixth term.

The important thing is: What happens now. 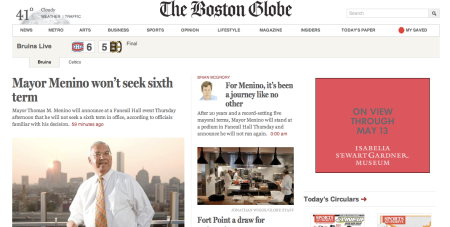 You tell us: Who’s working this story harder?

We have a rare tag-team effort today by the local dailies, starting with the lead piece in the Boston Globe: 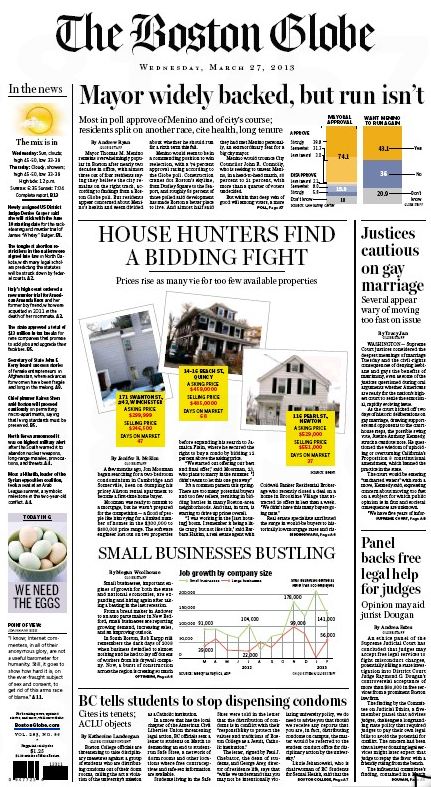 Hey – someone hand me that gold watch there, wouldja?

Originally posted at Campaign Outsider  for reasons unclear even to us.

Hark! The Herald! (Told You So Edition)

And the victory dance:

You’ll very likely see the Boston Herald celebrating itself and singing itself once again in its Saturday edition, thanks to this:

That’s right – our feisty local tabloid has made the Newseum’s Top Ten Front Pages list, this time compliments of Friday’s Page One:

Consequently, look for a Look at Us! feature coming soon to a tabloid near you.

Did They See the Same Movie? (‘Spring Breakers’ Edition)

The only thing the local dailies’ reviews of Spring Breakers have in common is the publicity photo they feature: 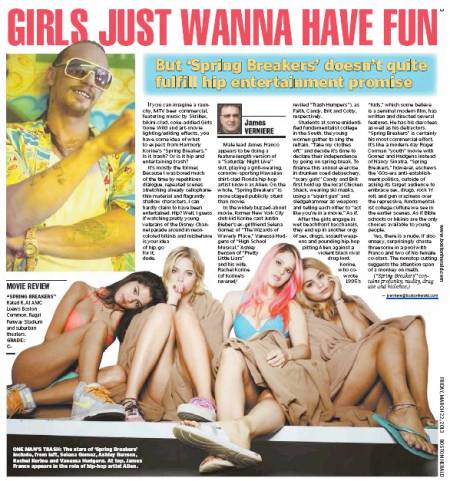 Beyond that, they’re talking about two completely different movies.

I derive no small pleasure from the thought of America’s youth flocking to see “Spring Breakers” expecting — well, what you’d expect a film called “Spring Breakers” to be — and finding instead a savage assault on every empty thought they hold dear.

At first glimpse, the movie is frat-comedy business as usual: images of half-clad college kids reveling in slow motion on the beaches of St. Petersburg, Fla. But the shots are held too long and the faces are dull-eyed and grotesque; the beer tubes and bong hits and naked breasts shade from bacchanalian to robotic. We seem to have left MTV’s spring break and entered David Lynch’s.

Actually, this universe belongs to Harmony Korine, the brat provocateur whose previous movies — including 1995’s “Kids” (which he only wrote but everyone gives him credit for anyway), 1997’s “Gummo,” and 2009’s “Trash Humpers” — have enraged proper-thinking audiences and critics while building a small, devoted base of cult followers. With the nominally mainstream “Spring Breakers,” count me in. Korine wants to give us a portrait of our nation’s children — the girls, especially — as beautifully depraved sharks, pleasure-seeking killers oblivious to the comedy and horror of their existence. And damned if he doesn’t pull it off, or come close enough.

If you can imagine a raunchy, MTV beer commercial, featuring music by Skrillex, bikini-clad, coke-addled Girls Gone Wild and art-movie lighting and editing effects, you have some idea of what to expect from Harmony Korine’s “Spring Breakers.” Is it trash? Or is it hip and entertaining trash?
It’s mostly the former. Because I was bored much of the time by repetitious dialogue, repeated scenes stretching already cellophane-thin material and flagrantly shallow characters, I can hardly claim to have been entertained. Hip? Well, I guess if watching pretty young veterans of the Disney Channel parade around in neon-colored bikinis and misbehave is your idea of hip, go for it, dude.

If you want a tiebreaker, you could check out this, but forewarned is forearmed – the headline/subhead is:

Yeah, that’s what I thought too.