I’ve always had a soft spot for Marvin Hagler, given that he launched my career as a media analyst.

As I’ve written elsewhere, on April 15, 1985 I trundled down to the old Boston Garden with a couple of friends to catch the closed-circuit telecast of the fight between undisputed middleweight champion Marvelous Marvin Hagler and Thomas “The Hitman” Hearns, the world junior middleweight champion who was moving up in weight class.

Also undisputed: The first three minutes of the fight constituted one of the greatest rounds, if not the greatest, of all time.

As we exited the old Causeway Street barn after those eight minutes of frenzied fighting, I said to my friend Greg, “that was direct response at its best, yeah?”

Greg happened to be the editor of the monthly trade publication AdEast. He said, “wanna write that up for our next issue? I need it by five o’clock tomorrow.” 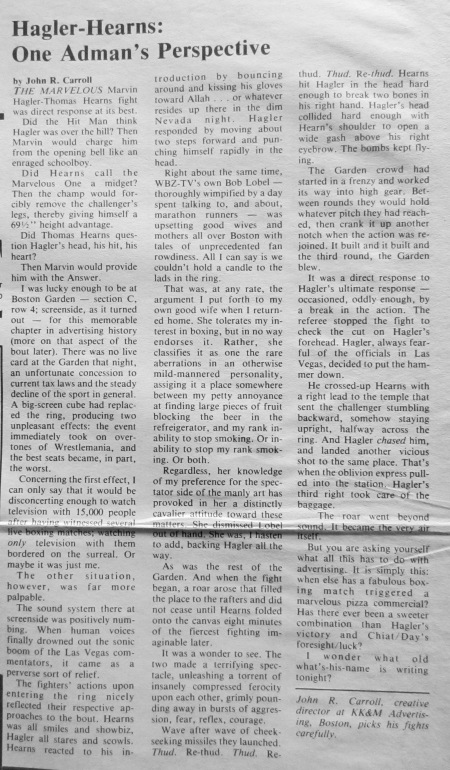 The Garden crowd had started in a frenzy and worked its way into high gear. Between rounds they would hold whatever pitch they had reached, then crank it up another notch when the action was rejoined. It built and it built and in the third round, it blew.

It was a direct response to Hagler’s ultimate response – occasioned, oddly enough, by a break in the action. The referee stopped the fight to check the cut on Hagler’s forehead. Hagler, always fearful of the officials in Las Vegas, decided to put the hammer down.

He crossed-up Hearns with a right lead to the temple that sent the challenger stumbling backward, somehow staying upright, halfway across the ring. And Hagler chased him, and landed another vicious shot to the same place. That’s when the oblivion express pulled into the station. Hagler’s third right took care of the baggage.

The roar went beyond sound. It became the very air itself.

All thanks to Marvin Hagler.

And now we need to address his sendoff in the Boston dailies.

The Globe has its story on Page One of the Sports section. It touches on the usual highlights of Hagler’s career – winning the middleweight belt in 1980 by beating Alan Minter in a London bout, the classic battle with Hearns, his final fight against Leonard (who has always been just Ray Leonard to me, as there is only one Sugar Ray, and that would be Robinson).

As the piece points out, Leonard ducked Hagler for years. “They finally met in 1987, Hagler almost 33 years old and 66 fights into his career. Leonard won a controversial split decision that night, Hagler’s last in ring. He left dejected and angered, never to return to the squared circle. ”

He was right to be angry, as this AP piece in today’s Herald indicates.

Leonard . . . was coming off a three-year layoff from a detached retina, in [Hagler’s] final fight in 1987. Hagler was favored going into the fight and many thought he would destroy Leonard — but Leonard had other plans.

While Hagler pursued him around the ring, Leonard fought backing up, flicking out his left jab and throwing combinations that didn’t hurt Hagler but won him points on the ringside scorecards. Still, when the bell rang at the end of the 12th round, many thought Hagler had pulled out the fight — only to lose a controversial split decision.

Beyond that, Leonard would actually stand and trade punches for the final 30 seconds of each round, which the credulous judges bought as carrying the fight.

The Herald’s Bruce Castleberry puts it nicely in his piece today: “[Leonard] was a boxer, not a fighter. I couldn’t stand the way he approached the sport. In and out of the ring, everything was calculated and programmed. Soulless.”

Marvin Hagler, by contrast, was soulful. And complicated. And a joy to watch. As the memorials say, gone too soon at age 66.