The Polish Cultural Institute has reached up from the Big Town to run this full-page ad in today’s Boston Globe as part of the country’s celebration of 100 years of independence. 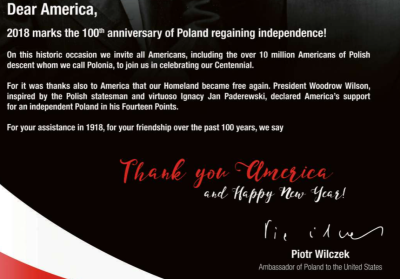 Except not you, Boston Herald.

Once again the thirsty local tabloid gets the air from an advertiser that thinks Boston is a One-Daily Town.

Of course, if this keeps up, it likely will be.

From our Tear the Sheets desk

There seems to be some confusion at the local dailies about what exactly transpired between White House squatter Donald Trump (R-Donald Trump) and New England Patriots owner Robert Kraft (R-NFL) over the GOP tax bill passed the other day.

According to yesterday’s Boston Herald Billionaire Bromance piece, Trump claimed that Kraft “based on this tax bill he just wanted to let me know that he’s going to buy a big plant in the great state of North Carolina and he’s going to build a tremendous paper mill there or paper products plant.”

But the Boston Globe’s Jon Chesto had a different take.

Unfortunately, the Kraft Group offered little clarity on the matter. A spokesman confirmed that Kraft and Trump spoke, and that Kraft believes the bill will spur corporate America to make significant capital investments.

But is a Kraft affiliate building another one in the Tar Heel State? The Kraft spokesman wouldn’t say. A spokesman for that state’s economic development office was similarly elusive.

As is just about everything Donald Trump has ever said.

As the hardreading safe has noted many times, the Boston Herald is routinely overlooked as an advertising vehicle by local institutions ranging from General Electric to Verizon to AJC Boston to CVS.

Some context here, from Ricky Doyle’s NESN profile of Rafael Devers in August:

“In my neighborhood, when I played vitilla (baseball with bottle caps), there was always this guy who would say, ‘Look at this one with that fresh face,’ and from then on I was ‘Carita.’ ”

Carita. Or Baby Face. Hmm… we’ll see if it sticks.

Back to the Sox ads. Both local dailies ran this one yesterday.

No explanation need for that, right?

But maybe an explanation for the ad campaign itself is in order.

Regardless, here’s what ticket buyers can expect for next year, via Nik DeCosta-Klipa at Boston.com.

The team announced Wednesday that [2018] (ticket prices at Fenway Park will increase by an average of 2.5 percent. Similar to last year, this means ticket prices are going up $1 to $5 for many of the seats closer to the field, as well as the bleachers.

Red Sox to fans: Read it and keep (paying more).

Let’s see how many of them vamos next season.

From our Hark! The Herald! desk

It’s always entertaining – and sometimes enlightening – when the Boston Herald covers itself, and this story in today’s edition is no exception. 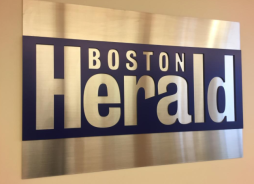 The Herald’s lights will stay on and it can pay most of its bills during the bankruptcy process, a Delaware judge ruled, as the newspaper enters Chapter 11 bankruptcy eyeing a late February sale to GateHouse Media.

Judge Laurie Selber Silverstein yesterday gave interim approval for business at the Herald to continue mostly as usual, including paying for utilities, payroll and insurance policies, as lawyers piece through the newspaper’s bankruptcy filing and GateHouse’s $4.5 million offer.

But not to pay the selfie local tabloid’s printer. “Herald bankruptcy attorney Bill Baldiga said the judge delayed approving payments to The Boston Globe for amounts owed for printing, delivery, inserts and paper returns, given uncertainty about the totals.”

What’s absolutely certain, though, is that the Herald owes the Globe “an estimated $600,000,” according to the former’s bankruptcy filing reproduced in the Boston Business Journal.

So it might not be a coincidence that Globe publisher John Henry wrote this mash note atop today’s editorial page.

Patrick J. Purcell, longtime owner and publisher of the Boston Herald, is someone who has spent most of his adult life tending to the most essential task of our democracy:

leading civic conversations in Boston that are sometimes contentious but are invariably important. While his efforts on behalf of journalism for the city are very well known, the personal impact he has had on so many over decades isn’t as familiar.

Our city knows Purcell as the driven media executive who bought the Herald from Rupert Murdoch in 1994. But he’s also unfailingly described as a loyal friend and devoted family man, who landed here after a colorful career in New York and became a Bostonian to his core.

Of course, Henry wouldn’t be so crass as to include an invoice in the editorial, although he did mention the Globe’s printing facility:

“I was giving Pat a tour of the Globe’s new print facility in Taunton about a year ago and as we walked through, people would seek him out just to shake his hand and thank him for things he had quietly done for them personally, or for something he had done to help a family member or associate.”

The bankruptcy court will address payments to the Globe on January 4. We’ll see if Henry’s still feeling this collegial after that.