From our Late to the After Party desk

As always, this year’s Emmy Awards spawned all kinds of self-congradulatory ads touting the number of wins various networks garnered.

And one of them actually landed in Sunday’s Boston Globe. 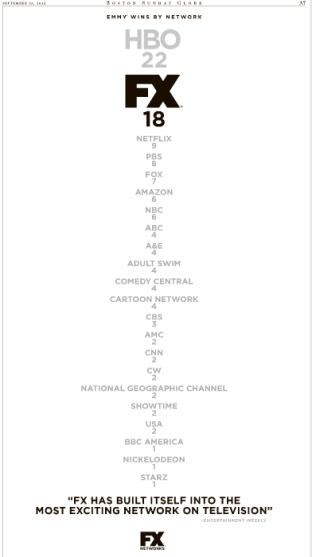 But not, alas, in the Boston Herald.

(As for the Herald’s editorial content, if you were to recommend Anger Management, it would be Justified.) 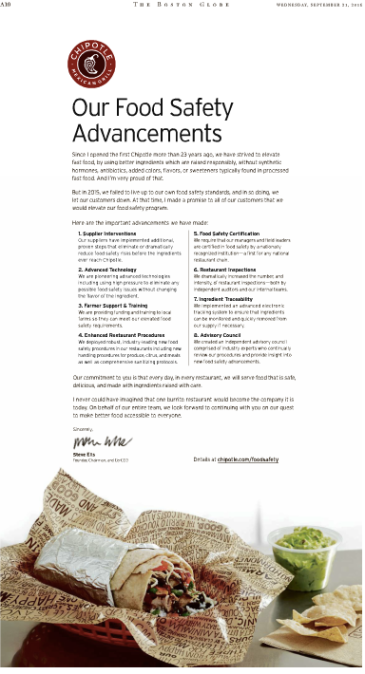 No such advertisement, however, appeared in yesterday’s spicy local tabloid (although it did run in the New York Times and the Wall Street Journal).

The hardreading staff has long whacked around the Boston Herald for celebrating itself and singing itself in so-called news reports. Now it’s time to give the Boston Globe a dope slap.

For starters, here’s what headlined the Globe’s homepage at 12:45 this morning:

That’s the residue of this Michael Levenson piece at the top of yesterday’s Globe front page:

There will be a party in the South End with music, art installations, and an unusual tasting competition featuring six beers brewed with water from the Charles River that’s been purified (they promise) by a local company.

There will be intimate seven-person lunches in Kendall Square where anyone can ask a Broad Institute geneticist why science hasn’t cured cancer or delve into the dangers of artificial intelligence with a director of the Harvard Innovation Lab.

And just before the first presidential debate, a prominent philosopher will lead an even more high-minded debate at Faneuil Hall, asking: Is it fair to tax the rich to help the poor? And should rich countries have the right to restrict immigration?

Such are the events — both playful and provocative — that organizers are planning for the slightly revamped second year of HUBweek, a festival devoted to the arts, science, and technology that is aiming to become Boston’s answer to South by Southwest in Austin, Texas.

It’s not until the sixth graf (on the jump page) that readers learn this:

[O]rganizers are . . .  grappling with how to ensure that the annual festival — which is sponsored by The Boston Globe, Harvard University, Massachusetts General Hospital, and the Massachusetts Institute of Technology — does not cater solely to the business and academic elite in downtown Boston, the Seaport, and Cambridge, where most of the events are held.

Maybe the Globe should grapple with how to ensure that promotional material is not presented as news. The hardreading staff would be happy to participate in that high-minded debate.

Meanwhile . . . Free the Michael Levenson One!

We tend to think of the Boston Herald as the town’s stern grandpa, holding everyone to the straight and narrow. While the Herald continues to be narrow, though, it’s not always straight. The tokey local tabloid features this full-page ad from Boston Smoke Shop in today’s edition.

The ad fails to mention where and when the Boston Freedom Rally will occur (Saturday and Sunday on the Boston Common), but that’s weed for you.

Meanwhile, not high but in high dudgeon is the Herald editorial page, which weighs in with this bit of pearl-clutching.

Secretary of Transportation Stephanie Pollack is right — Massachusetts needs a reliable test to determine whether a driver is impaired by marijuana. And if Question 4 passes, legalizing the recreational use of pot, the importance of developing such a test will be even more important.

“One of the concerns with marijuana is, it is clear at some point, you are impaired legally, but we don’t have a test like we do for alcohol,” Pollack said on Boston Herald Radio this week.

There is an interim step that Beacon Hill could take — and frankly already should have taken. They could make it illegal to drive while in possession of marijuana, as it is with an open container of alcohol.

And remember: It’s against the law to smoke anything on the Common. Not to get technical about it.

Crosstown at the Boston Globe, there’s no Boston Smoke Shop ad, but there is this pot headline on Page One: “Colorado serves edible marijuana with a side of controversy.” And brownies you can eat on the Common.

Well, this is something new from the pluggy local tabloid: Roughly 40% of the Edge section in today’s Boston Herald is “Presented by Lexus Broadway in Boston.” 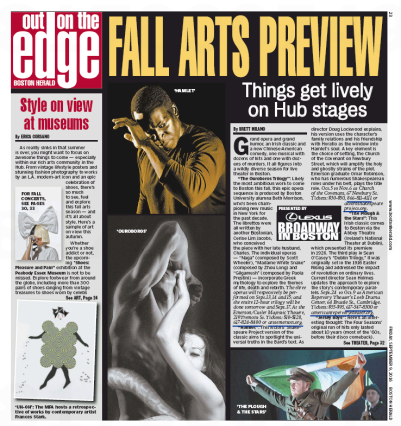 All the editorial carries Herald bylines, which makes things pretty blurry. Then again, as our kissin’ cousins at Sneak Adtack noted earlier this week, “A study from FIPP and the Native Advertising Institute found that over two-thirds of magazine publishers employ their own editorial staffs to produce native ads.”

Maybe it’s time to do a study of newspaper publishers as well.

The hardreading staff has no idea who paid for it, but this ad appears in today’s Boston Herald obituary pages. 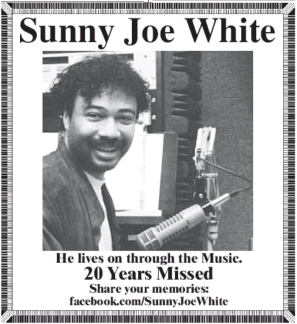 Don’t recognize the name? Here’s how the Massachusetts Broadcasters Hall of Fame describes him:

Sunny Joe White was the original Program Director of legendary Boston radio station Kiss 108. The former Beautiful Music station in Medford known as WHIL-FM set the market on fire when it became a full-time disco station in 1979. Sunny was the connection to the stars. As disco died in the early 80’s, Sunny transformed Kiss 108 into a major Top 40 station which still holds national records for huge ratings. When the Kiss Concert started in the 80’s it was Sunny’s relationship with the promoters and record labels that enabled the Kiss Concert to become the preeminent radio station concert in America.

The Facebook page listed in the ad describes itself as “a place for those who were reached by his voice and his spirit to share memories.” Such as this one:

Not sure who LadyD is, but nicely done.