For the past five years the Boston Herald has been a wholly owned subsidiary of Donald Trump, but today the chumpy local tabloid has plumbed new depths.

From Jay Fitzgerald and Keith Regan in today’s MASSterList:

It’s pretty amazing for a newspaper editorial board that has remained absolutely silent, one way or the other, on President Trump’s divisive charges that the presidential election was stolen from him is now advising Joe Biden to consider giving Trump a pardon. But that’s exactly what a Herald editorial is advising this morning.

Pardoning Trump would also give Biden room to address the country’s urgent problems, such as getting coronavirus vaccines to all who need them, freeing up stimulus checks to help struggling families, and taking steps to get the economy back on track after a devastating year.

Seriously? Pardoning Trump is going to get Biden to 60 votes in the Senate? Or convince more than 60% of Americans to actually get vaccinated?

That’s about as likely as Trump taking Biden to Bedminster for a round of golf.

I don’t know what they’re smoking at the goofy local tabloid, but it’s probably not cigars.

The hardreading staff has long whacked around the Boston Herald for celebrating itself and singing itself in so-called news reports. Now it’s time to give the Boston Globe a dope slap.

For starters, here’s what headlined the Globe’s homepage at 12:45 this morning:

That’s the residue of this Michael Levenson piece at the top of yesterday’s Globe front page: 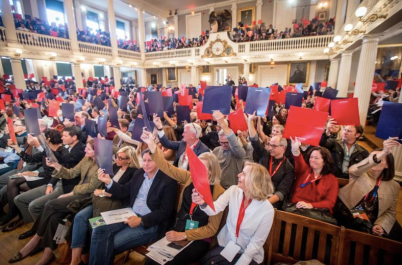 There will be a party in the South End with music, art installations, and an unusual tasting competition featuring six beers brewed with water from the Charles River that’s been purified (they promise) by a local company.

There will be intimate seven-person lunches in Kendall Square where anyone can ask a Broad Institute geneticist why science hasn’t cured cancer or delve into the dangers of artificial intelligence with a director of the Harvard Innovation Lab.

And just before the first presidential debate, a prominent philosopher will lead an even more high-minded debate at Faneuil Hall, asking: Is it fair to tax the rich to help the poor? And should rich countries have the right to restrict immigration?

Such are the events — both playful and provocative — that organizers are planning for the slightly revamped second year of HUBweek, a festival devoted to the arts, science, and technology that is aiming to become Boston’s answer to South by Southwest in Austin, Texas.

It’s not until the sixth graf (on the jump page) that readers learn this:

[O]rganizers are . . .  grappling with how to ensure that the annual festival — which is sponsored by The Boston Globe, Harvard University, Massachusetts General Hospital, and the Massachusetts Institute of Technology — does not cater solely to the business and academic elite in downtown Boston, the Seaport, and Cambridge, where most of the events are held.

Maybe the Globe should grapple with how to ensure that promotional material is not presented as news. The hardreading staff would be happy to participate in that high-minded debate.

Meanwhile . . . Free the Michael Levenson One!

The Boston dailies continue to reside in parallel universes. Page One of today’s Boston Herald:

Hillary Chabot’s column provides the details of the Washington Maul.

Perhaps Joe Biden is already breaking out the charm offensive he’s honed for the 2016 presidential trail and he’s code named it:

The notoriously inappropriate vice president breached one woman’s personal boundaries yesterday as he swore in Defense Secretary Ashton Carter in the Roosevelt Room.

The gaffe-prone VP put his hands on Carter’s wife’s shoulders from behind for a long time, leaned over and whispered something into her ear, creating an Internet sensation that rippled far throughout the presidential primary battlefield.

Plug “Joe Biden” into the Googletron and you get a taste of said Internet sensation.

And that’s not even counting all the tweets that hit the fan.

Crosstown, meanwhile, the Boston Globe has nothing in today’s print edition and just this AP piece up on the web. 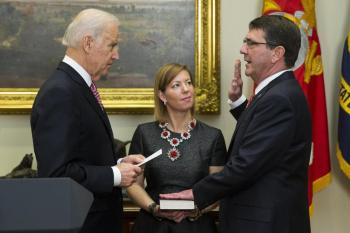 Vice President Joe Biden issued the oath of office from the White House, on a Bible held by Carter’s wife, while most of the federal government was closed because of snow. Biden said Carter faces ‘‘many tough missions,’’ ranging from battling Islamic State militants and strengthening the NATO alliance, to technological advancements and budget cuts.

‘‘This is the guy that fits the job,’’ Biden said, calling Carter a ‘‘profoundly capable manager.’’

Just not capable of protecting his wife’s dignity, eh?

Today’s the Day the Chinstrokers Have Their Picnic

The only real takeaway from this debate is we really need term limits for politicians. Joe Biden was first elected to the Senate in 1972 at age 30. Somewhere around 1992, he should have had to go out and get a real job.

Nothing like having to answer to a boss to make you a little more humble. What’s up with the smirking? It seemed like Clint Eastwood was back up on stage, this time in character from “Gran Torino.”

Not to mention don’t sit in my chair.

OMG. Vice President Joe Biden was an embarrassment not only to the Democrat ticket, but also for the country.

Clearly he was attempting to make up for the inadequate performance of President Obama by attacking Paul Ryan’s every syllable.

He overcompensated with the phony laugh and the constant interruption. It was hard to get over Biden’s wild-eyed look to hear what he was saying. The best word to describe his performance is: unhinged.

Wow. Not sure Holly’s all that hinged herself.

Even though it was two-on-one, Margery Eagan managed to hold her own with this minority report:

Joe Biden, the 69-year-old granddad best known for his gaffes and goofs, committed conduct unbecoming a vice president last night. He mocked Paul Ryan. He grinned and laughed too much. It was dismissive and annoying. It reminded me of Al Gore’s exasperated, exaggerated sighs at George W. Bush . . .

But good ol’ Joe did what Obama needed him to do. He attacked Ryan’s facts repeatedly (“With all due respect, you’re full of malarkey”). And he had a far better abortion answer for pro-choice women. (“I refuse to impose (my pro-life personal views) on others, unlike my friend here, the congressman,” who would criminalize abortion.)

Biden bought his boss some time. Panicked, demoralized Democrats can only hope Obama shows a quarter of Biden’s fight at his next debate.

Panicked, demoralized Democrats can also check out the Boston Globe, where Biden got a more modulated (read: less rapid) welcome from the chinstrokers.

Is Biden’s performance enough to stop the slide?

With so much of Thursday night’s vice presidential debate centered on foreign policy, incumbent Joe Biden had a clear path to victory. His depth of knowledge separated him from Republican challenger Paul Ryan. The cheers at a Hampton Democratic Committee viewing party were ample evidence that Biden said much of what these Democrats had wanted to hear from President Obama last week.

So we’ll take that as a yes.

In theory, vice presidential debates shouldn’t matter that much — only 18 percent in a recent Rasmussen Poll said it would be “very important” to their vote — and that’s the way it should be. Neither guy, one hopes, will be president and the basic task of each is to demonstrate, if disaster strikes, that he would be up to the job. Biden has proven before that he would be, and Thursday night Ryan seemed competent on a national stage.

Yet this particular debate did matter and especially for Biden. He had to stem the Mitt Romney surge that over the last week has remade this race. He may have helped slow it, but probably it hasn’t been reversed.

So we’ll take that as a draw.

And just for fun, we’ll throw in this Glen Johnson analysis:

Paul Ryan shows he is no pushover in debate

Presidential campaigns are akin to gestational periods, with months of campaigning giving voters time to slowly form their impressions of a candidate.

Against that backdrop, Representative Paul Ryan of Wisconsin stepped onto likely his biggest stage yet on Thursday night and showed an American electorate still getting to know the Republican vice presidential nominee that he is no pushover.

In a contentious 90-minute debate with Vice President Joe Biden, Ryan engaged in a frontal assault on a politician nearly three decades his elder. And he didn’t cower even when the discussion started with and kept coming back to foreign affairs – a supposed weakness for an economic policy wonk like him and strength for a former chairman of the Senate Foreign Relations Committee like his opponent.

So we’ll take that as an okay, and leave it at that.

Once anticipated as an entertaining sideshow between two feisty candidates, the vice presidential debate Thursday night has taken on higher, unexpected importance in the wake of President Obama’s listless performance last week in Denver.

Democrats are nervous, Republicans sense a surge, and Vice President Joe Biden and GOP challenger Paul Ryan suddenly have a chance to influence the campaign in a substantive way when they meet at Centre College in Danville, Ky.

For Biden, voluble and aggressive, the goal is to steady the Democratic ship amid sinking polls and rising angst. For Ryan, a hard-line budget hawk, the game plan is to maintain or build on the bump that has buoyed Mitt Romney after the first presidential debate.

Crosstown at the Herald, it’s a whole different ballgame, one that involves whacking Joe Biden (via the Newseum’s Today’s Front Pages):

The Joe Battenfeld piece inside predicts Biden’s credit-card-friendly track record may draw some interest and penalties from Ryan in the debate.

It’s the Joe Biden embarrassment you may not have heard yet, but it could become one of the Romney campaign’s biggest weapons.

Biden likes to portray himself as a fighter for the poor and middle class, but for years in the U.S. Senate he sided with one of the most hated enemies of the middle class — credit card companies.

The vice president has skated on this issue in this campaign, largely because most people have been paying attention to his verbal blunders. That may come to an end as soon as tonight, when he faces off against GOP vice presidential nominee Paul Ryan.

The local dailies are running true to form in their coverage of the Democratic National Convention.

The Globe’s ramp-up to the convention in Monday’s edition:

Gov Missing in Mass. But Finds Spotlight in N.C.

Media get VIP treatment in N.C.

Delegates vow to get down to business . . . after a little chill time

The Herald also features scattered “You Said It” reader comments, a DNC Charlotte Notebook,  and Brown’s Take, the bookend to last week’s Warren’s Take (sample here) at the GOP convention.

On Friday, as noted by the ever-alert Dan Kennedy of Media Nation (whose new page looks mighty familiar, no?), the Boston Globe acknowledged that this August 17th editorial had ripped off this Todd Domke post on WBUR’s website.

(Tip o’ the pixel to the splendid commenter who sent the hardreading staff this last night: “The plagiarism flap over an unnamed Globe editorial which copied words and structure of a commentary (on Biden’s chains comment) that Todd Domke wrote for BUR web site may be in both papers tomorrow.  Dan Kennedy has an account on his blog.  BG wants to put out the story tomorrow and reveal punishment before the Herald blows it open.  Talk of suspension for yet unnamed writer. Ain’t it great to live in a 2 paper town?”)

But, no – no damage control in the Globe, no damage in the Herald, where this kind of story is normally mother’s milk.(Too busy darning those Sox to bash the crosstown rival? Tsk tsk.)

Jim Romenesko picked it up, but no play we can find beyond that.

Just like Isaac, this is gonna pop sooner or later.