A recent item in Politico’s Morning Score noted that “nearly $11.3 million has been spent on television ads in Democratic incumbents’ districts [between October 1 and December 6], according to data provided to Score by Advertising Analytics. A whopping $9.4 million of that has come from Republican groups, led by American Action Network’s $4.4 million.”

Of course, one group’s charade is another group’s sham – witness the theme of this full-page newspaper ad from America First Policies. 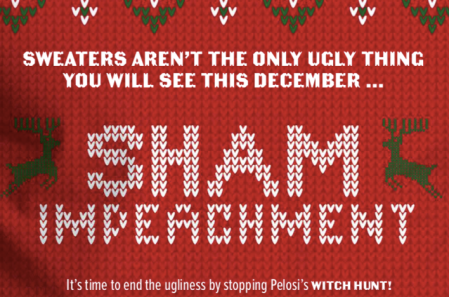 According to an AFP press release, $276,750 of the $2 million advertising campaign is going to a variety of newspapers.

But not the Boston Globe.

The stately local broadsheet rejected this version of the ad according to a Fox News  report last night. (It’s in two pieces due to technical difficulties.)

Nuts to you graf:

The Boston Globe told Fox News that the ad “does not meet our advertising acceptability standards” but that it was “open to reviewing a reworked version.” The paper also insisted that it accepted opinion advertisements “regardless of our editorial position on any given subject.”

However, according to America First Policies, the “modifications” the Globe suggested included removing the word “sham” and using a “better picture” of Pappas.

AFP, in turn, told Fox News that “more than two dozen papers approved its printing, including the Chicago Tribune, the Des Moines Register and the Minneapolis Star Tribune.

Kelly Sadler, the group’s communications director, added this: “We know the Boston Globe’s editorial board is pro-impeachment, but had no idea that bias extended to its sales department.”

The hardreading staff awaits the next shoe to drop.

As one of the Boston Herald’s 17 home subscribers, the hardreading staff noted numerous times over the past few years how the print edition of the skimpy local tabloid was often missing late-breaking news and – especially – sports scores.

That deficiency became even more glaring when the Herald shifted its printing a year and a half ago from the Boston Globe’s Taunton facility to the Providence Journal’s Rhode Island press, moving deadlines up to, oh, tea time.

(That contributed in no small part to our dropping the print subscription after several decades and going all-digital.)

But at least the Herald E-Edition would deliver the the later stuff.

Here’s the E-Edition reporting on the New England Patriots’ unthinkable (lookin’ at you, Dan Shaughnessy) loss to the Houston Texans last night.

As it says at the bottom of the left-hand page, you can get full coverage of last night’s game here.

But at that point, why would you bother?