The hardreading staff has noticed – as perhaps you splendid readers have also – that the Boston Globe’s Names column tends to be a weak carbon copy of Olivia Vanni’s Inside Track at the Boston Herald.

Latest case in point: Rob Delaney’s blue Christmas without his son Henry, who died at the age of 2 1/2 earlier this year.

While the holidays are meant to be a time for all that’s merry and bright, Rob Delaney gave everyone a friendly reminder that grief doesn’t take a break. The Marblehead-raised comedian/actor/writer recently got real on Twitter, opening up about his family’s first Christmas since the passing of his toddler son, Henry, in a series of emotional posts.

“Our first Christmas without Henry came & went,” he wrote. “The day itself was okay, maybe because there were so many horrible, painful days leading up to it; we must have hit our quota or something. We talked about him a lot & included his memory throughout the day.”

The day after Christmas, Rob Delaney tweeted about what the holiday was like without his son Henry, who died at age 2½ earlier this year. The “Catastrophe” actor and Marblehead native wrote that he talks publicly about Henry to help “destigmatize grief” for other families who have experienced loss. Henry was diagnosed with a brain tumor in 2016 and died in January.

“Our first Christmas without Henry came & went,” Delaney wrote on Twitter Wednesday. “The day itself was okay, maybe because there were so many horrible, painful days leading up to it; we must have hit our quota or something. We talked about him a lot & included his memory throughout the day.”

The daily Herald costs two bucks. The Sunday Globe costs five. You tell us which is worth your gossip dollar.

From our Late to the Christmas Party desk

First, this after-Christmas ad appeared in the Boston Globe and the Boston Herald.

The Hobby Lobbiacs also advertised some soul saving in the papers.

Gift with Jesus: A free Bible app for your phone.

No surprise that the Herald would be the local Amen Corner, but the Globe as well? Will wonders never cease.

Are we having none yet?

The powers that be at the Boston Globe have continued their assault on the comics pages, as this note in today’s edition indicates. 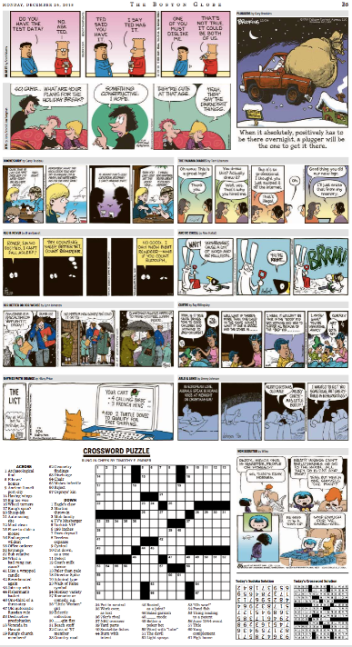 Let’s call the roll of the “several” strips that have been dumped. First, the good ones: Zippy (second time the Globe Pinheads have dropped him), Get Fuzzy, Mother Goose & Grimm, Bizarro, Bliss.

That would be 11 dropped comics if you’re keeping score at home.

Worse yet, consider some of the dogs they’ve kept: Red & Rover, Zits, Arctic Circle, The Pajama Diaries, For Better Or For Worse, Curtis, Arlo & Janis – all mind-numbingly either a) stupid, or b) unfunny.

Of course, the stately local broadsheet doesn’t care what old fogeys like the hardreading staff think. It’s too busy chasing the millennial crowd that it will likely never get.

But as Don Seiffert reported last week at the Boston Business Journal, “[a]s of Sept. 30, the paper had 109,409 weekday subscribers and 190,787 Sunday-only subscribers — down year-over-year by 11 percent and 13 percent respectively.”

And that, of course, is no joke.

The hardreading staff gave the local dailies two days to piggyback on Jo C. Goode’s dustup with Fall River Mayor Jasiel Correia in his increasingly desperate attempt to hold onto his office.

So let’s repair to The Herald News for the story (tip o’ the pixel to Brian Stelter’s Reliable Sources newsletter).

FALL RIVER — The Herald News is standing behind its reporter Jo C. Goode as Mayor Jasiel Correia II has repeatedly attempted to discredit her reporting through a website he created.

For the second time in a month, Correia posted the link to jogoode.com on Twitter, which brings people to a website displaying a meme of President Donald Trump declaring “You are fake news.”

The latest link came in response to a Tweet from Goode that a crew affiliated with HBO and Mark Wahlberg was filming Correia in Government Center Thursday afternoon. The first instance came after Goode posted a question on Twitter on Nov. 24 asking if Correia was moving from his Bank Street apartment. The Herald News previously had reported that Correia had been served a notice to quit by Dec. 1, sharing the document on heraldnews.com.

When asked about the site, Correia told the Herald News ““It just is what it is. Jo reports fake news and I stand by it.”

Not even sure what that means, but clearly the guy has issues. They just have yet to register with the Boston dailies.

(For those of you keeping score at home: Here’s the link for jogoode.com and here’s Correia’s Twitter feed. Enter at your own peril.)

From our Late to the Going-Away Party desk 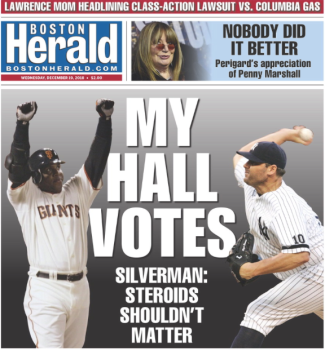 Barry Bonds and Roger Clemens — Their supposed sins seem to be evaporating right in front of the eyes of once suspicious voters. I can’t figure out how four more voters — 242 — voted for Clemens than Bonds last year, but at least last year’s voting showed the two above 50 percent for the second consecutive year, at 57.3 and 56.4 percent respectively. They have four more years on the ballot. We can only hope the two most impactful players of their generation will get their due.

The hardjudging staff does not agree, and – as a Made Yankee Fan in Boston – we resent the shifty local tabloid’s shunting off Steroid Roger to the Bronx Bombers-in-numerous-postseasons.

Do Globe Layoffs Have ‘Your Worried’? It’s Too Late

As the hardreading staff worked its way through Saturday’s local dailies, we encountered this headline on Hiawatha Bray’s latest tech column in the Boston Globe. 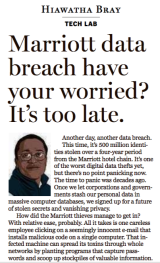 Of course the headline should have read “have you worried.”

Then again, grammatical glitches in the shrinky local broadsheet are no surprise, given that the Globe is shedding editorial staff like a Corgi in spring.

Which should have your worried, no?