We tend to think of the Boston Herald as the town’s stern grandpa, holding everyone to the straight and narrow. While the Herald continues to be narrow, though, it’s not always straight. The tokey local tabloid features this full-page ad from Boston Smoke Shop in today’s edition. 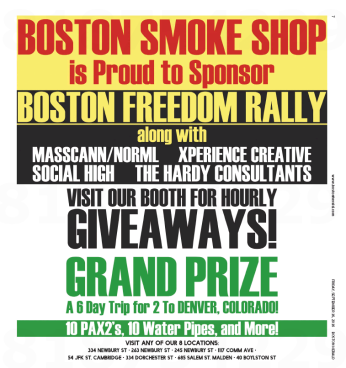 The ad fails to mention where and when the Boston Freedom Rally will occur (Saturday and Sunday on the Boston Common), but that’s weed for you.

Meanwhile, not high but in high dudgeon is the Herald editorial page, which weighs in with this bit of pearl-clutching.

Secretary of Transportation Stephanie Pollack is right — Massachusetts needs a reliable test to determine whether a driver is impaired by marijuana. And if Question 4 passes, legalizing the recreational use of pot, the importance of developing such a test will be even more important.

“One of the concerns with marijuana is, it is clear at some point, you are impaired legally, but we don’t have a test like we do for alcohol,” Pollack said on Boston Herald Radio this week.

There is an interim step that Beacon Hill could take — and frankly already should have taken. They could make it illegal to drive while in possession of marijuana, as it is with an open container of alcohol.

And remember: It’s against the law to smoke anything on the Common. Not to get technical about it.

Crosstown at the Boston Globe, there’s no Boston Smoke Shop ad, but there is this pot headline on Page One: “Colorado serves edible marijuana with a side of controversy.” And brownies you can eat on the Common.

This entry was posted on Friday, September 16th, 2016 at 1:06 pm and is filed under Uncategorized. You can follow any responses to this entry through the RSS 2.0 feed. You can leave a response, or trackback from your own site.