As the hardreading staff unfolded its Boston Sunday Globe yesterday, we encountered this notice at the bottom of Page One.

We also encountered this 68-page magazine nestled inside the paper.

Must be an advertising supplement for Boston Children’s Hospital, we thought, given its relentlessly sunny-side-up Table of Contents. 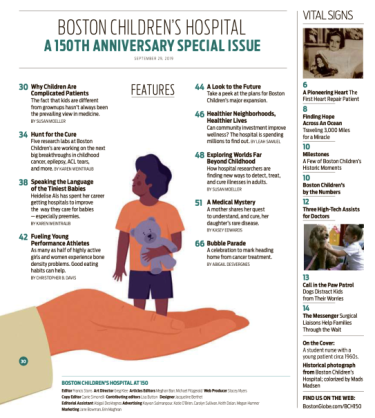 But, actually, the magazine was produced by Boston Globe staffers.

It’s one puff piece after another, interspersed with dozens of costly congratulatory ads.

But no mention in those 68 pages of the hospital’s wanton destruction of the beloved Prouty Garden, or the battle over the hospital’s questionable expansion to service a projected – but by no means assured – international clientele.

To be clear, this isn’t the first time the Globe has played footsie with BCH. As we previously noted: 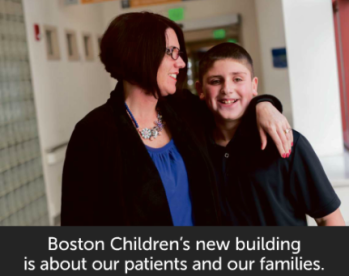 This is getting really flagrant.

As the hardreading staff has noted multiple times, the Boston Globe has put on a full-court press over the past week promoting the proposed expansion of Boston Children’s Hospital.

Last week it was an op-ed piece from former Massachusetts Taxpayer Foundation president Michael Widmer urging state officials to get off their duffs and approve the expansion, already. Problem was, the Globe failed to mention that Widmer sits on the hospital’s Board Committee for Community Service.

On Sunday, this Globe editorial urged the state’s Public Health Council to approve the project.

Not to mention the Globe’s accepting full-page ads from Children’s as it supported the hospital’s expansion on its Business pages and providing op-ed space for BCH president and CEO Sandra Fenwick to plead her case unopposed by dissenting points of view, of which there have been many.

To be fair, newspapers routinely produce vehicles largely designed to draw advertisers. This one just seems a little, well, germy.

This entry was posted on Monday, September 30th, 2019 at 12:29 pm and is filed under Uncategorized. You can follow any responses to this entry through the RSS 2.0 feed. You can leave a response, or trackback from your own site.

One Response to Boston Globe’s Wet Kiss to Children’s: Rx for $$$