Boston was on the mind of everyone who ran the London Marathon yesterday, as Page One of The Guardian attests (via the Newseum’s Today’s Front Pages). 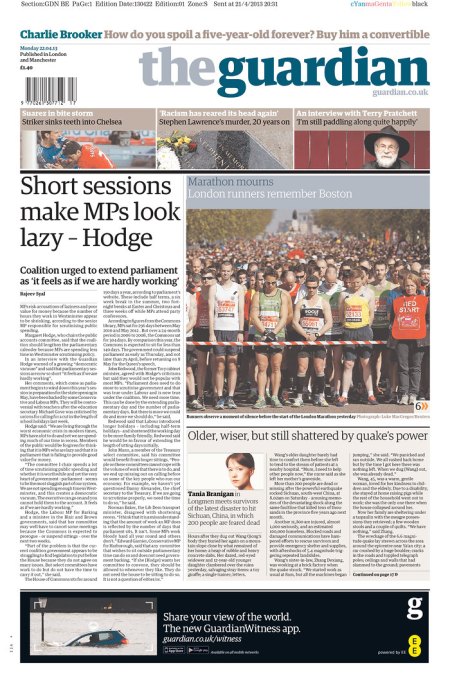 And London was on the mind of the Boston dailies – especially the Globe, which sent sportswriter Shira Springer over there to cover the event.

Boston firmly in the thoughts of Londoners

LONDON — Moments after finishing the London Marathon, Harry Neynens struggled with his emotions. He started to describe crossing the finish line Sunday amid cheering crowds, then stopped. He needed a moment to collect his thoughts, to choke back tears. He started his story again. This time, the narrative began back on Boylston Street in Boston.

For Neynens, the 2013 London Marathon and 2013 Boston Marathon always will be linked. A week ago, Neynens, who lives in Enfield, Nova Scotia, waited on Boylston Street for his wife, Colleen, to finish Boston. Colleen spotted Harry in the crowd at the 26-mile mark, ran over, and kissed her husband. Then Harry walked down Boylston Street to catch up with Colleen once she crossed the line. She finished as 4 hours 7 minutes 12 seconds flashed on the race clock. He found himself 100 yards away from the bomb explosions and he saw some of the critically injured victims.

“I had a hard day out here,” said Neynens, who wore a 2013 Boston Marathon hat during his London run and finished in 2:48:09. “I was hurting, but obviously I was not hurting near as much as the injuries that I saw, people who lost their legs. I finished for all those people who were hurt and those people who couldn’t finish last Monday.

“There was a banner we passed around Mile 25 that said, ‘Run if you can. Walk if you must. But finish for Boston.’ That meant a lot to everybody. It was great to see the support of everybody out there for the runners and for Boston.”

It went beyond moral support, as this Associated Press report in the Boston Herald noted:

For a day, at least, Boston and London were One as well.

This entry was posted on Monday, April 22nd, 2013 at 6:06 pm and is filed under Uncategorized. You can follow any responses to this entry through the RSS 2.0 feed. You can leave a response, or trackback from your own site.