Battle of the Bulger (Cullen the Facts Edition)

The Boston Herald wants you to know it’s on the Whitey Bulger trial like Brown on Williamson, so they’re running this ad in today’s edition: 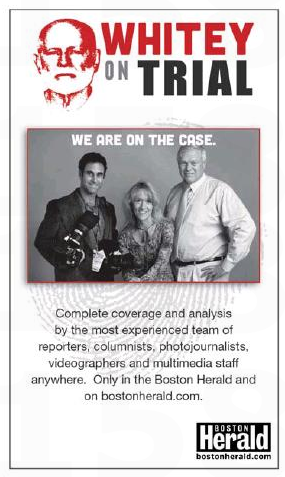 And here’s an example of that “complete coverage.”

Judge Denise J. Casper ruled yesterday that Boston Globe reporter Shelley Murphy and columnist Kevin Cullen can attend James “Whitey” Bulger’s trial, exempting them from her order to keep witnesses out of the courtroom except to testify . . .

In a separate court motion yesterday, Bulger’s lawyers threatened a push to isolate the jury from the outside world throughout the expected four-month trial “if the editors of the Globe do not show better judgment in the publication of columns that are designed to sell newspapers and for-profit books written by this columnist (Cullen).”

Here’s the same issue in the Globe:

Earlier Friday, Bulger’s defense attorney J. W. Carney Jr. filed a court motion in support of the request to ban Murphy and Cullen from the courtroom, alleging that Cullen’s Friday column on Bulger was sensational and would prejudice a jury.

Carney later said he would consider asking that the jury in the case be sequestered, which would prove to be costly and a hardship for jurors, if the Globe does not “show better judgment in the publication of columns that are designed to sell newspapers and for-profit books written by this columnist.”

But Casper rejected Carney’s argument when she granted the newspaper’s request to exclude Cullen and Murphy from the courtroom during testimony, noting the journalists’ constitutional rights in reporting on Bulger’s past and covering his trial.

[To be sure graf goes here.]

To be sure, both papers are pursing their own interests: the Herald to make the Globe look bad, the Globe to make itself look good. (The stately local broadsheet for the most part doesn’t concern itself with the feisty local tabloid.)

That’s all to be expected. But hey, Heraldniks: Complete coverage? Try again.

This entry was posted on Saturday, June 8th, 2013 at 4:47 pm and is filed under Uncategorized. You can follow any responses to this entry through the RSS 2.0 feed. You can leave a response, or trackback from your own site.

One Response to Battle of the Bulger (Cullen the Facts Edition)