On the Cover of the Roiling Stone

First off, it should be noted that the Boston Herald broke this Rolling Stone story on page 3 of yesterday’s edition (don’t ask about the little green numbers – no idea why they keep popping up): 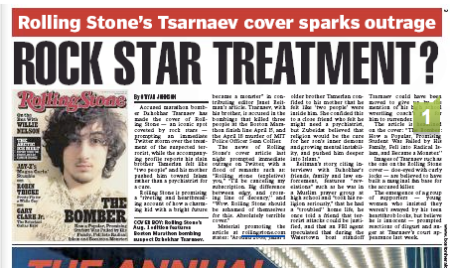 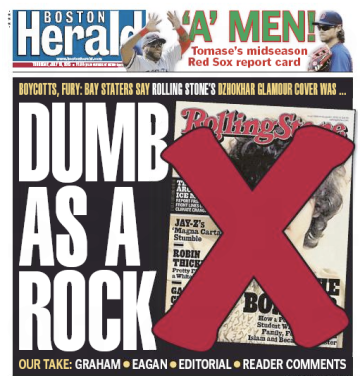 The one dissenting voice was columnist Margery Eagan, but she was drowned out by the other coverage, which included a couple of news reports and the always-enlightening comments of Herald readers. 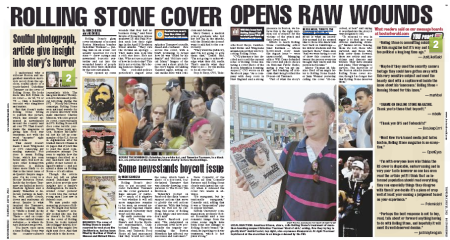 Our personal favorite among the reader responses:

But wait – the paper’s not done yet. There’s also a smashmouth editorial, along with a venomous column from Michael Graham:

Magazine’s the picture of desperation

Hey, Rolling Stone magazine! Next time you want to prove how provocative and edgy you are, put a flattering photo of George Zimmerman on your cover.

And that’s part of the reason for Boston’s completely righteous anger over the magazine’s “Terrorist Teen Beat” cover featuring Dzhokhar McDreamy. It’s insulting and stupid, and they know it.

But if it sells magazines (or even better — drives up Web traffic), they don’t care.

Crosstown rival Boston Globe has a more evenhanded debate on its front page:

[T]he magazine’s advance hype for the story — “a riveting and heartbreaking account of how a charming kid with a bright future became a monster” — hinted at a somewhat more sympathetic portrayal of Tsarnaev than many readers might expect.

Then again, the cover also identifies him as a bomber — going farther in asserting Tsarnaev’s guilt than the criminal justice system has at this point. All of which suggests that Rolling Stone is better at trying to create buzz than at recognizing the sensitivity of a recent incident that led to four Boston-area residents’ deaths and inflicted horrifying injuries on many more. Still, readers shouldn’t assume that a cover story about a suspected evildoer represents an attempt to glamorize him. This issue of Rolling Stone should be judged not by its cover, but on the information that it brings to the public record.

This entry was posted on Thursday, July 18th, 2013 at 6:21 pm and is filed under Uncategorized. You can follow any responses to this entry through the RSS 2.0 feed. You can leave a response, or trackback from your own site.

5 Responses to On the Cover of the Roiling Stone