Seamus on the Boston Herald! STILL No Heaney Obit

Today marks the third edition of the Boston Herald to ignore the death of the great Seamus Heaney.

It’s not like anyone at the dicey local tabloid would have to actually read some of Heaney’s poetry. They could just run a wire story, they way they did today with David Frost’s obituary. 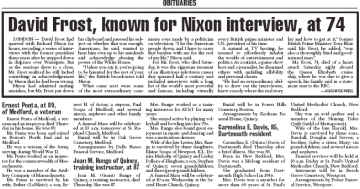 Better yet, they could pick up this appreciation by Roy Foster in The Guardian:

Seamus Heaney, who has died at the age of 74, was a poet of immense power, a brilliant intellect, an inspiration to others – and the best of company

My first thought on hearing the immeasurably sad news of Seamus Heaney‘s death was a sensation of a great tree having fallen: that sense of empty space, desolation, uprooting. Heaney’s place in Irish culture – not just in Irish poetry – was often compared to that of WB Yeats, particularly after he followed Yeats in winning the Nobel prize in 1995. He possessed what he himself ascribed to Yeats, “the gift of establishing authority within a culture”. But whereas Yeats’s shadow was seen, by some of his younger contemporaries at least, as blotting out the sun and stunting the growth of the surrounding forest, Heaney’s great presence let in the light. Part of this was bound up in his own abundant personality. Generosity, amplitude and sympathy characterised his dealings with people at every level, and he was the stellar best of company. It was as if he had learned the lesson prescribed (though not really followed) by Yeats: that the creative soul, “all hatred driven hence”, might recover “radical innocence” in being “self-delighting, self-appeasing, self-affrighting”.

This entry was posted on Monday, September 2nd, 2013 at 4:27 pm and is filed under Uncategorized. You can follow any responses to this entry through the RSS 2.0 feed. You can leave a response, or trackback from your own site.

One Response to Seamus on the Boston Herald! STILL No Heaney Obit