Several days ago the hardreading staff posted an item about the Jewish News Service running this ad in the Boston Herald but not the Boston Globe. 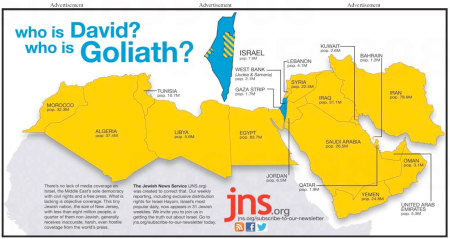 We also said we’d try to contact JNS founder (and inveterate publishing bunny) Russel Pergament to ask, among other things, if he’ll be advertising in the Globe anytime soon.

And so we did. Whereupon we had a nice conversation with Pergament, a media dynamo the hardworking staff has known for over three decades, ever since he was founding the Tab newspapers and we were copy chief at Filene’s.

(Best part of that job: We met the Missus.)

Best part of Russel Pergament: He’s entirely unfazed at JNS being depicted “as foaming-at-the mouth right wingers,” as he put it, referring to this Jewish Daily Forward piece.

Instead, he says this:

Even the most left-wing Jewish writers who see Israel as an aggressive Nazi-like state get nervous about reports like this one from Swedish tabloid Aftonbladet [regarding Jewish soldiers purportedly harvesting the organs of Arabs].

Pergament says a dozen papers – including Christian media and secular media that “emphasize the objective nature of the facts we send” – have subscribed to JNS.  He says he’s also run ads in The New Republic and a New Britain, CT paper, while the Jerusalem Press and Chicago Tribune have picked up JNS content.

As for the Boston dailies, Pergament says he gets more bang for the buck in the Herald, and that the Herald sales rep called and asked for his business.

This entry was posted on Thursday, October 17th, 2013 at 1:44 pm and is filed under Uncategorized. You can follow any responses to this entry through the RSS 2.0 feed. You can leave a response, or trackback from your own site.