But pity especially poor Quincy, MA, which suffered yet another creching loss on Wednesday. 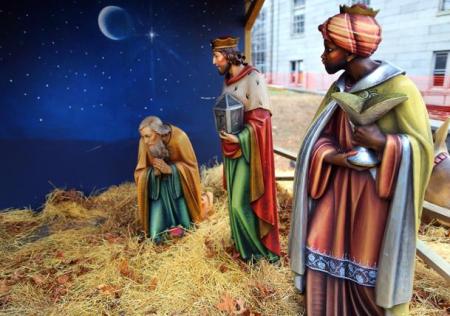 Statues of Jesus, Mary, and Joseph and a lamb were stolen from a nativity scene in Quincy Square early Thursday morning and a shepherd left behind on a sidewalk in the third such incident at the creche scene in the past nine years, Quincy police said . . .

A street sweeper discovered the crime when he found the shepherd statue on a nearby sidewalk at around 2:24 a.m., police said.

“The shepherd was out on the sidewalk and the Jesus, Mary, Joseph, and a lamb were missing,” said Captain John Dougan, Quincy police spokesman.

Happily, the Boston Globe reported yesterday, at least some of the lost are found.

Statues from nativity scene are recovered

Three statues plundered from a nativity scene in Quincy Center sometime overnight Wednesday were discovered undamaged early Friday by a construction crew and were returned to the manger Friday afternoon, officials said.

“They found Jesus, Mary, and Joseph at the end of Furnace Avenue,” said Captain John Dougan, Quincy police spokesman. “They found all of them except for the lamb. That is still on the lam.”

Yesterday’s Boston Herald print edition, which was thinner than the gold on a week-end wedding ring (tip o’ the pixel to the great Raymond Chandler), had nothing about the recovery.

Regardless, here’s our question for the good folks of Quincy:

What’s the Baby Jeez doing out there on December 4th?

This entry was posted on Sunday, December 8th, 2013 at 12:46 pm and is filed under Uncategorized. You can follow any responses to this entry through the RSS 2.0 feed. You can leave a response, or trackback from your own site.