Globe a Lively Postscript to the Herald

But things got turned around yesterday when the feisty local tabloid went Page One with outgoing mayor Tom Menino’s decision to skip the inauguration of his successor, Marty Walsh.

Went Page One gleefully, we might add – and exclusively in the local dailies’ bakeoff. 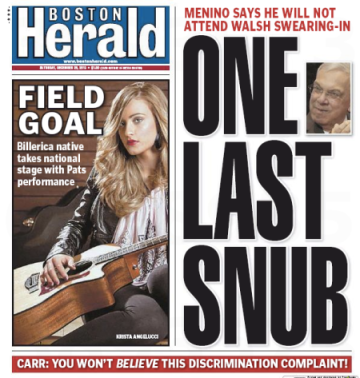 Today the Boston Globe has the story Page One Metro, and the stately local broadsheet gives credit to the Herald high up in the piece.

Mayor breaks with tradition of going to successor’s event

Breaking with the city’s historical precedent, outgoing Mayor Thomas M. Menino will be one of just a handful of Boston mayors in the past century who did not attend their successors’ swearing-in ceremonies.

Menino told reporters on Friday that he will not formally participate in the Jan. 6 inauguration of Mayor-elect Martin J. Walsh.

“No,” Menino said, when asked by a Boston Herald reporter if he would be involved in the swearing in. “It’s Marty Walsh’s day. It’s not Tom Menino’s day.”

But today is the firsty local tabloid’s day, isn’t it?

This entry was posted on Sunday, December 29th, 2013 at 5:13 pm and is filed under Uncategorized. You can follow any responses to this entry through the RSS 2.0 feed. You can leave a response, or trackback from your own site.