Did the Globe Give a Mulligan to Tom Menino on Boston Development?

In his 20-plus years in office, Mayor Thomas M. Menino began as the healer of Boston’s neighborhoods. Over time, he morphed into the commander of downtown development.

Of course I’m simplifying. But I think that’s the short story people will remember about this mayor and his impact on the architecture of the city . . .

The mayor was involved in virtually every decision about architecture and urban design during his tenure. He wasn’t a visionary thinker, nor was he strong on aesthetics. But he was a master of detail who always seemed to know everything that was happening. He won’t be remembered for any single grand urban gesture. Instead, he presided over a multiplicity of lesser projects that, taken together, have changed the face of the city.

For better and for worse, as Campbell’s piece makes clear.

When Mayor Thomas M. Menino took office in 1993, Boston’s downtown was in the grip of a recession. Construction had slowed to 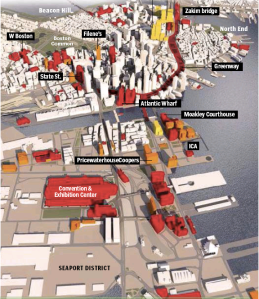 a crawl, retailers were struggling, and the elevated Central Artery still spewed exhaust onto a waterfront that was more gritty than glitzy.

Then, an improbable chain of events unfolded: The Big Dig, massive cost overruns and all, replaced the rusting steel of the artery with a series of parks; people and new stores began moving back into the city’s core; and developers created bold plans for North Station, Downtown Crossing, and the South Boston waterfront.

Today, those sparks of renewal are exploding in a historic spate of development, with more than 5,700 homes under construction and huge office, retail, and housing complexes rising from the South Boston Innovation District to Dudley Square. While he was not directly responsible for all of those projects, Menino played a central role in rebuilding a city that is now among the world’s top markets for real estate investment.

This entry was posted on Sunday, January 5th, 2014 at 11:03 am and is filed under Uncategorized. You can follow any responses to this entry through the RSS 2.0 feed. You can leave a response, or trackback from your own site.