A nifty little criss-cross has religion and politics switching places in the local dailies today.

Inside the story gets two pages: a news report that seems to be mostly AP material, and his ‘n’ her columns from Ray Flynn and Margery Eagan.

On page 3 of the feisty local broadsheet, there’s this piece:

Right off the top, the documentary “Mitt” shows a defeated Mitt Romney teary-eyed and searching for help in crafting a concession

speech — and the personal number for President Obama.

“By the way, someone have a number for the president?” a dejected Romney asks on election night Nov. 6, 2012, in his hotel suite in Boston.

“What do you say in a concession speech?” he adds.

Seriously? Anyway, the point of the piece is this: “[A] top Romney adviser and friend admitted the campaign blew it by repeatedly opposing the release of the documentary, which could have helped Romney shed his stiff, robotic image.”

Crosstown at the Boston Globe, Romney moves up to the front page. 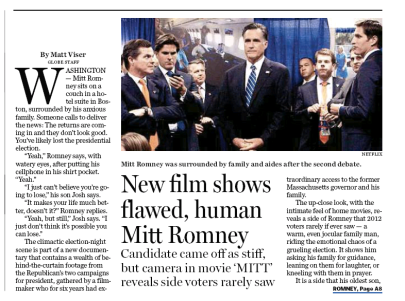 This “Mitt” piece has Romney’s son Tagg doing the lamenting:

“I was frustrated that we were not able to get an accurate portrayal of who my dad was out there,” Tagg said in an interview Friday, as he discussed the film. “The campaign team wanted to present a very controlled image. . . . The movie shows a very real human being: a flawed person with weaknesses but someone who is much more real and understandable.”

Meanwhile, it’s the Pope who gets page 3 in the stately local broadsheet, also via the AP.

The statistics for 2011 and 2012 show a dramatic increase over the 171 priests removed in 2008 and 2009, when the Vatican first provided details on the number of priests who have been defrocked. Before that, it had only revealed the number of alleged cases of abuse it had received and the number of trials it had authorized.

While it’s not clear why the numbers spiked in 2011, it could be because 2010 saw a explosion in the number of cases reported in the media in Europe and beyond.

This entry was posted on Saturday, January 18th, 2014 at 2:38 pm and is filed under Uncategorized. You can follow any responses to this entry through the RSS 2.0 feed. You can leave a response, or trackback from your own site.