The hardreading staff, which is three-quarters Irish (and a proud citizen of Ireland, to boot), has always disliked St. Patrick’s Day with its amateur drinkers and Irish for a Day idiots. (The old man used to say we had an Irish sense of work and a German sense of humor.)

Back then we lived at 89th and 3rd, just three blocks from where the St. Patrick’s Day Parade ended, so each year we spent the next morning sweeping the drunks off every stoop on the block.

We don’t like the fauxliday any better up here, what with all the annual knee-jerk nonsense that goes on in South Boston. But this year there was the new wrinkle of State Sen. Linda Dorcena Forry hosting the traditional St. Patrick’s Day breakfast, and we expected some lively coverage in the local dailies.

Not so fast, Armaugh Boy.

Surprisingly, the Boston Herald’s coverage was flat as yesterday’s beer.

Laurel Sweet got all of seven paragraphs for her piece on the breakfast, and the parade coverage got the same.

Crosstown at the Boston Globe, by contrast, Dorcena Forry was the Cover Gal.

The Metro section featured two reports on the parade – here and here – along with columnist Adrian Walker waxing enthusiastic about the breakfast. 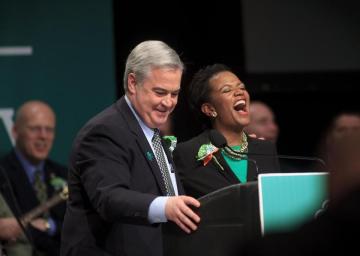 You could spot a difference in the St. Patrick’s Day breakfast right from the start this year: The comedic opening was actually funny.

There was a video of Linda Dorcena Forry in front of the convention center sticking Bill Linehan in a cab and then explaining to the driver, in subtitled Haitian Creole, “Remember what we talked about. You need to take him on a long, long ride.”

And with that video Dorcena Forry strode into the breakfast, leading the crowd in the St. Patrick’s favorite, “Step Into the Parlor.” It had taken her roughly two minutes to completely own the event.

The same way the Globe owned the coverage in the Daily Bakeoff.

This entry was posted on Monday, March 17th, 2014 at 1:32 pm and is filed under Uncategorized. You can follow any responses to this entry through the RSS 2.0 feed. You can leave a response, or trackback from your own site.