The gutsy dancer who lost part of her left leg in the marathon bombings accused “Meet the Press” late yesterday of being “dishonorable” for naming the accused terrorists during a local taping of the Sunday show after she was led to believe they wouldn’t. 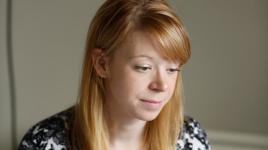 in a front-page Herald story — said she was in tears when she walked out on the taping of tomorrow’s “Meet the Press” at the Hyatt Boston Harbor hotel.

“Your decision to back out on that promise you made and the horrific way you brought that decision to my attention just minutes prior to taping was not only a cowardice move but a dishonorable one as well,” Haslet-Davis posted on her website, adriannehaslet-davis.com about the names being used.

(Herald columnist Adriana Cohen was in high dudgeon as well, but that’s her default position.)

Meanwhile, crosstown at the Boston Globe, here’s the play the story got (Metro p. 2):

This entry was posted on Saturday, April 12th, 2014 at 12:47 pm and is filed under Uncategorized. You can follow any responses to this entry through the RSS 2.0 feed. You can leave a response, or trackback from your own site.