The local dailies occupy parallel universes today in their coverage of the ongoing violence/protest in Ferguson, Mo.

Yes, both have editorial cartoons mirroring the unrest in the wake of the Michael Brown shooting.

But beyond that, the papers couldn’t be more different in their opinion pieces.

Former homeland security official/gubernatorial candidate Juliette Kayyem’s op-ed in the Globe about the failures of the law enforcement community:

Globe columnist Derrick Jackson’s piece on the failure of white Americans to, well, get it:

Crosstown at the Herald, though, the failure all belongs to the media. 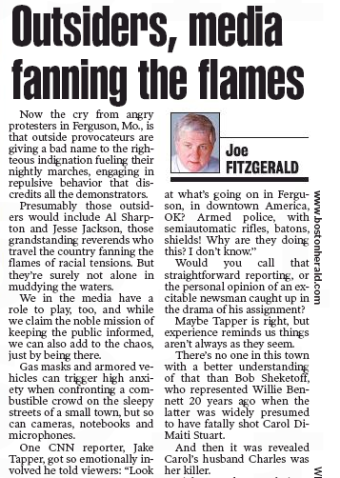 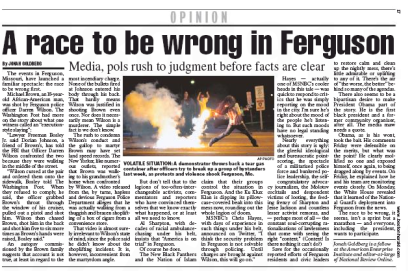 This entry was posted on Wednesday, August 20th, 2014 at 3:48 pm and is filed under Uncategorized. You can follow any responses to this entry through the RSS 2.0 feed. You can leave a response, or trackback from your own site.