So. Is the Massachusetts Democratic gubernatorial primary primarily – inexorably – changed now that the candidates have had their debate on Boston Herald Radio?

Start, as  always, with Page On, the top half of which touts the Big Bakeoff. 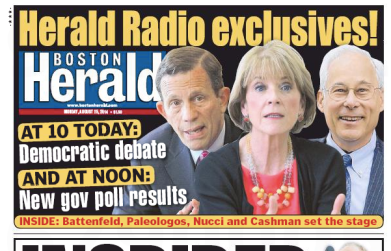 Inside, the Herald has two pages of new/hype in anticipation of the main event.

Tale of the tape:

And just in case you haven’t grasped the transformative power of a debate on Internet radio, the Herald scribes all strike the same chord in their ledes.

Leave your talking points at the door. Save your stump speeches for the campaign trail. At today’s Boston Herald Radio debate, we’re aiming for a free-flowing conversation where we’ll learn more about the three candidates facing off in the Democratic gubernatorial primary.

It’s a long shot, but there’s still a way for Attorney General Martha Coakley to lose the Democratic gubernatorial nomination, and it would have to start at today’s Boston Herald Radio debate.

Coakley’s campaign is showing signs of cracking. Democratic party leaders are getting worried it will be 2010 all over again.

Believe it or not, the primary election is just over two weeks away, and Democrats face a critical choice on who will represent their party in November. The timing of today’s Democratic gubernatorial debate on Boston Herald Radio makes it pivotal, and likely to set the tone for the closing days.

As of 1 pm – the debate’s over, the poll numbers are out – here’s the only coverage the hardsearching staff could find: A Boston Globe online recap.

In bitter debate, Democratic gubernatorial candidates take aim at each other, Baker

In the most bitter debate of Democratic gubernatorial race so far, Treasurer Steven Grossman sharply questioned the judgment of frontrunner Martha Coakley, painting her a protector of the Beacon Hill establishment, as former Medicare and Medicaid chief Don Berwick attacked his two rivals for their support of casino gambling in the state and their years-long embrace of “politics as usual.”

Coakley, the attorney general, defended herself, offered a few hits on Grossman, but also aimed some fire at Republican Charlie Baker, who is expected to be his party’s gubernatorial nominee.

Just over two weeks before the Sept. 9 state primary, the three Democratic candidates vying for their party’s nod upped their rhetoric against each other right from the beginning of an hour-long Boston Herald Radio debate at the newspaper’s Seaport headquarters.

The debate between the Democratic candidates for governor kicked off in high gear today as Treasurer Steve Grossman went on the attack over Attorney General Martha Coakley’s $100,000 settlement with a lobbying group.

“It’s the worst form of judgment,” said Grossman, who slammed what he called the go-easy environment on Beacon Hill.

Not so easy-going off Beacon Hill though.

The Herald knows it’s not who listened to the web stream of the debate that will determine its impact. It’s the play the debate gets in the rest of the news media that counts.

This entry was posted on Monday, August 25th, 2014 at 1:17 pm and is filed under Uncategorized. You can follow any responses to this entry through the RSS 2.0 feed. You can leave a response, or trackback from your own site.