The Boston Globe is on the story like Brown on Williamson, starting Page One Metro. 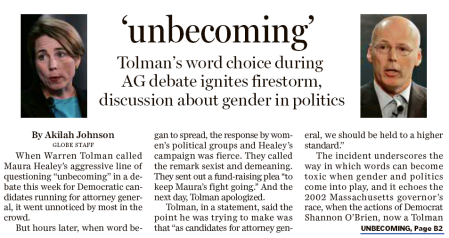 Tolman’s moonwalking, of course, accomplished nothing with the umbrage-industrial complex, exemplified by this response:

Barbara Lee, of the Barbara Lee Family Foundation, which is dedicated to getting more women involved in politics, tweeted: “Code for close race = #unbecoming #unladylike #cold #bossy. Men always try to knock women off pedestal[s] like this in #mapoli and beyond.”

On the op-ed page of the stately local broadsheet (yikes! can we still use that term?), columnist Joan Vennochi tried to inject some reality into the conversation.

Unbecoming issue in the AG race

ATTORNEY GENERAL candidate Maura Healey was ruthlessly pushing Democratic rival Warren Tolman to explain what she describes as his record as a lobbyist, when Tolman, who contends he never lobbied anyone, replied: “Maura, it’s just unbecoming. I’m surprised you continue to push these issues rather than talk about the issues people care about.”

Tolman said he’s sorry now. But before he apologized, the word “unbecoming” triggered an urgent fundraising letter from Marty Walz, a Healey backer and president of the Planned Parenthood Advocacy Fund of Massachusetts. “It means unattractive, indecorous. It’s not a word you hear men on Beacon Hill use about each other,” wrote Walz.

True enough. And, with Tolman in the lead in a tight, increasingly nasty race, it’s no surprise the Healey campaign would jump on her opponent’s use of it. After all, the word “unbecoming” holds a special place in Massachusetts politics. But overplaying it is a mistake. It didn’t help the last female candidate who tried.

Crosstown at the Boston Herald, an editorial entirely underplayed it.

Time to get real

How did it come to this? How did two really smart contenders for attorney general, two people who have already served the public and seem committed to the notion of public service, get caught up in a meaningless war of words?

Warren Tolman, a former state senator (and a sometime writer for these pages), took issue in a Tuesday debate with his Democratic primary opponent Maura Healey, a former assistant attorney general, when she criticized his work as a lobbyist.

“You go down this path, Maura, it’s just unbecoming,” he said.

Well, you would have thought from the reaction of the sisterhood that the man had just suggested she tie on an apron and return to the kitchen.

Right. Better both candidates should get back to business.

This entry was posted on Thursday, August 28th, 2014 at 4:19 pm and is filed under Uncategorized. You can follow any responses to this entry through the RSS 2.0 feed. You can leave a response, or trackback from your own site.