The Ad You’ll Never See in the Boston Herald

Everyone can agree that the senseless murder of Dawnn Jaffier, a young woman whose bright future was shot dead last month as she walked down a Dorchester street, should never be repeated.

The problem is, it will be – as so many others have – unless some significant change comes to Boston’s neighborhoods.

That’s the message of this ad that the Lewis Family Foundation ran in yesterday’s Boston Globe.

And the Lewis Family Foundation’s prescription for change: 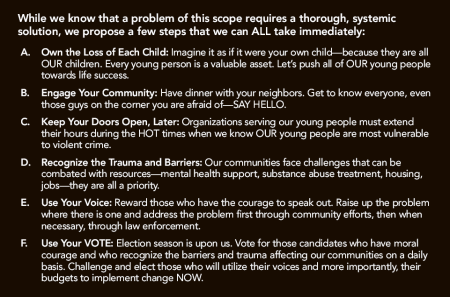 According to Idealist.org, “[in] Boston’s Dorchester, Roxbury and Mattapan neighborhoods the Foundation has pledged, donated or leveraged more than $27M in support of college access and success, safety, jobs, mentoring, food, health and housing programs.”

Not surprisingly, the ad did not run in the Boston Herald. And likely never will.

This entry was posted on Thursday, September 11th, 2014 at 10:37 am and is filed under Uncategorized. You can follow any responses to this entry through the RSS 2.0 feed. You can leave a response, or trackback from your own site.