As the hardreading staff has said on numerous occasions, Boston is blessed not only to be a two-daily town, but a two-cartoonist town as well.

Both line men address the same topic today, but with very different sensibilities – not to mention sensitivities. 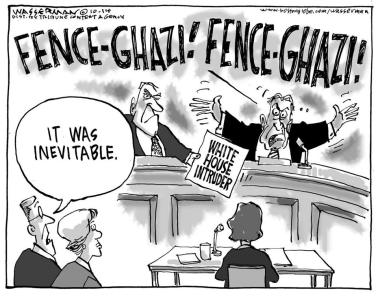 UPDATE: Actually, someone did call re-draw. From BostonMagazine.com:

[A] similar cartoon posted to an archive of Holbert’s work on GoComics.com doesn’t use the watermelon stereotype—in that version, the toothpaste is raspberry-flavored, even though the rest of the cartoon is drawn up exactly the same: 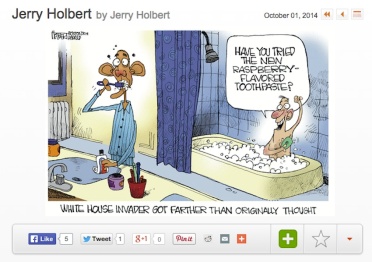 It’s unclear at what point the choice to use “watermelon” was made before the cartoon went to print and appeared in Wednesday’s newspaper.

In fact, it was the other way around, as BoMag‘s update indicates:

Holbert clarified Wednesday that it was his intention to include the term “watermelon” in his cartoon, not thinking about the racial connotations, and the switch to “raspberry” was made by outside editors since his cartoons are syndicated.

Holbert told [Boston Herald radio] that on Tuesday night someone wrote to him and asked if they could change the watermelon reference, and he was “confused” by the request. “I changed it to raspberry and sent it back to them,” he said.

Maybe he should have kept it instead.

This entry was posted on Wednesday, October 1st, 2014 at 11:47 am and is filed under Uncategorized. You can follow any responses to this entry through the RSS 2.0 feed. You can leave a response, or trackback from your own site.