It’s rare to find the two local dailies on the same page, but today it’s this one: 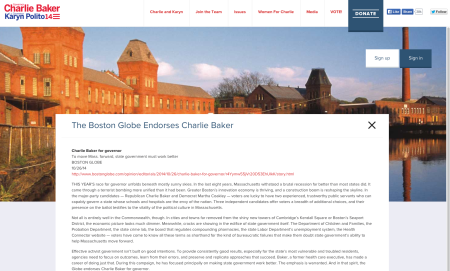 The Boston Globe’s somewhat surprising endorsement of Charlie Baker comes one week after the Boston Herald’s entirely predictable one.

The flirty local tabloid also ran this big wet kiss alongside the endorsement. 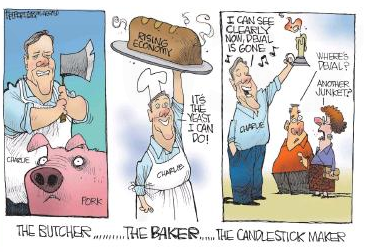 Coakley’s response? The oldest (and lamest) dodge in the books (via USA Today):

Coakley’s campaign released a statement Sunday touting the endorsements she has received from labor groups and other organizations, while making reference to her bid for history. She is seeking to become the first woman elected governor of Massachusetts. “We know that the only endorsement that matters is the endorsement of the people of Massachusetts on Nov. 4,” said the Coakley statement in the Lowell Sun.

See ya next Tuesday.

This entry was posted on Monday, October 27th, 2014 at 12:30 pm and is filed under Uncategorized. You can follow any responses to this entry through the RSS 2.0 feed. You can leave a response, or trackback from your own site.

One Response to Boston Globe and Herald Merge!