Start, as usual, with Page One. 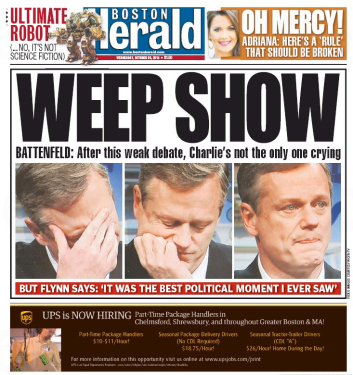 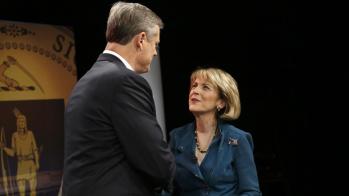 Forget about Charlie Baker crying. The ones who should be crying are the voters.

Would you rather win the Lottery or the election?

What’s your signature dish in the kitchen?

What’s the best Halloween costume for your opponent?

Those were actual questions in a debate that will be the last time most voters see Baker and Democrat Martha Coakley in a televised, face-to-face confrontation.

Baker’s cry will get the most attention in this bizarre debate showdown. And that’s not a bad thing for a Republican accused of being a heartless budget cutter. Baker’s cry did not look contrived — he looked like a dad watching the last scene of “Field of Dreams.” And it certainly won’t hurt him among the most important voters in this race — women.

The real winners of last night’s final gubernatorial debate were … the voters.

Both Charlie Baker and Martha Coakley gave real insight into their character and heart. It was the best political moment I ever saw. 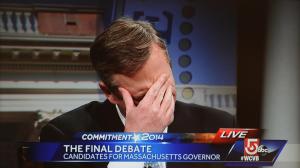 They proved that politics is not about hate and division, but about decency and love. Call it naive on my part, but last night’s showdown was the best example of what government should be about. When a teary-eyed Charlie Baker told the story of a beleaguered New Bedford fisherman and his two sons trying to keep the family business from going under because of the burden of federal fishing regulations, I could identify with that hard-working father, and it reminded me of why elections are so important.

Yeah, except if the family business couldn’t support the old man, how was it gonna support the three of them? We were confused.

But we did mist up a bit.

This entry was posted on Wednesday, October 29th, 2014 at 12:53 pm and is filed under Uncategorized. You can follow any responses to this entry through the RSS 2.0 feed. You can leave a response, or trackback from your own site.