From our Late to the Hanging Party desk

After an initial pool of 1373 potential jurors (who filled out a 28-page questionnaire) was whittled down to 256 by presiding US District Judge George A. O’Toole, whose interviews yielded 75 possibly unbiased jurors who then shrank to the Elite Eighteen – 12 jurors and six alternates – Boston now has an actual jury for the trial of Dzhokhar Tsarnaev for the Boston Marathon bombings that killed three people – Martin Richard, Krystle Campbell, and Lingzi Lu (along with MIT police officer Sean Collier) – and wounded over 200.

And the finalists had their cotillion in Wednesday’s local dailies. 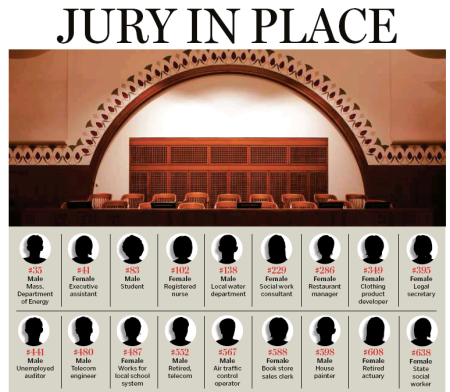 This is shaping up to be one hellacious bakeoff between the two local dailies.

Fasten your seat belts, as Bette Davis would say. It’s going to be a bumpy trial.

This entry was posted on Thursday, March 5th, 2015 at 9:01 am and is filed under Uncategorized. You can follow any responses to this entry through the RSS 2.0 feed. You can leave a response, or trackback from your own site.

One Response to Boston Dailies: Tsarnaev Jury’s In