As the Carmine Hose continue their pitched battle with Tampa Bay for fourth place in the American League East, the team has launched Fan Appreciation Week for the season’s final seven games.

(Fan Appreciation, of course, means We Appreciate Any Fannies We Can Put in Fenway.)

So the Red Sox ran this ad in today’s Boston Globe: 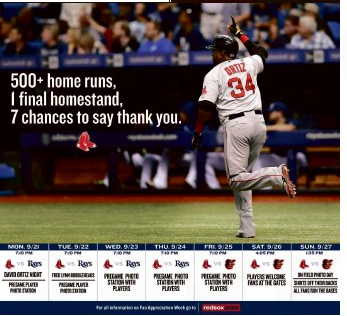 First off, 1 final homestand? Is David Ortiz retiring? Or going elsewhere? Cause he sure doesn’t sound like it in this Peter Abraham wrap of yesterday’s dramatic win over the Blue Jays.

At 39, Ortiz is watching these final weeks of the season like a scout, hoping to see players who can form the core of a contending team before he retires.

Is the team trying to tell Ortiz something with this ad?

Regardless, the season’s final week, for those of you keeping score at home.

That’s a lot of appreciating, eh?

Then again, they probably don’t appreciate it at the Boston Herald, which once again struck out in the advertising department.

Just not at the thirsty local tabloid.

This entry was posted on Sunday, September 20th, 2015 at 12:54 pm and is filed under Uncategorized. You can follow any responses to this entry through the RSS 2.0 feed. You can leave a response, or trackback from your own site.