At this point, it’s hard not to think that the Boston Globe is so far in the tank for the proposed Children’s Hospital expansion, they should be wearing scuba gear on Morrissey Boulevard.

As the hardreading staff noted last week, the Globe ran this op-ed piece by former Massachusetts Taxpayer Foundation president Michael Widmer on Wednesday. Widmer argued that there’s been too much shilly-shallying over approving the expansion and that state agencies should step aside and let Children’s get on with it.

What did not get mentioned in the op-ed piece is that Michael Widmer sits on the hospital’s Board Committee for Community Service. 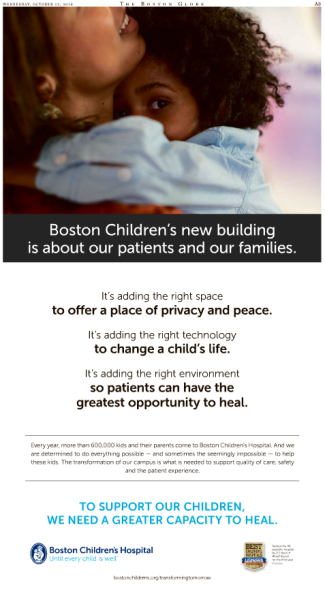 Sure looks like the left hand does know what the right hand is doing. (Another full-page Children’s ad ran last Friday.)

And then came this editorial in yesterday’s Globe.

A yes for Children’s Hospital project

A STATE PANEL’S upcoming vote on a $1 billion building project proposed by Boston Children’s Hospital comes down to this: Will allowing one of the nation’s most prestigious pediatric care centers to become bigger also drive up medical spending statewide and cause irreparable harm to Children’s competitors? The short answer: It doesn’t have to. Concerns about the project’s ripple effects are legitimate, but they don’t outweigh the need to upgrade a hospital that provides life-saving care to thousands of children from Massachusetts and around the world.

To be sure, it’s quite possible that everyone at the Globe is just swimming in their own lane and there’s no concerted effort to boost the fortunes of a deep-pockets advertiser. (We count at least six full-page ads over the past seven months.)

But when the paper won’t even properly identify a Children’s board member using the Globe’s op-ed page to flack for the hospital, you really start to wonder.

This entry was posted on Monday, October 17th, 2016 at 2:29 pm and is filed under Uncategorized. You can follow any responses to this entry through the RSS 2.0 feed. You can leave a response, or trackback from your own site.