NBC Boston Spans the Globe (But Not the Herald)

As the hardwatching staff has noted, the new NBC Boston (not to be confused with the old NBC Boston owned by arch nemesis Ed Ansin) has an uphill climb to establish itself in the local market.

For starters, there are the 20 – count ’em, 20 – different dial positions the new NBC Boston occupies, as this recent Boston Globe ad enumerated.

Not to mention, as we previously mentioned:

You think they can find Channel 60.5?

Regardless, yesterday was the official launch of NBC Boston, which the new enterprise marked by purchasing the Globe’s home delivery plastic bag, as well as wrapping the paper with an ad that included two skinny panels: 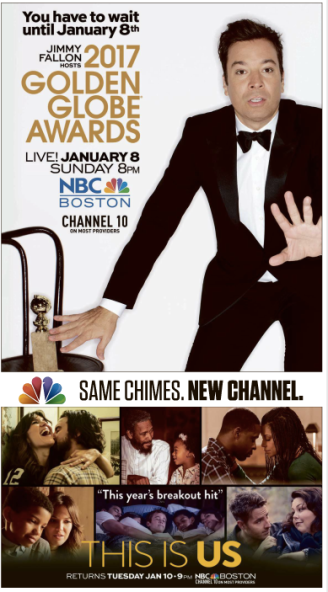 Today NBC Boston got a sort of gift with purchase from the Globe: This front-page Don Aucoin piece.

The muscle-flexing — or perhaps I should say feather-preening, since we’re talking about the Peacock Network — began early Sunday morning as NBC Boston made its debut. And it never really let up.

NBC’s mission: to convince the audience its programs are so popular that viewers will not only embrace its decision not to renew its affiliate agreement with WHDH-TV (Channel 7) but will also follow NBC to its new spot, with its own identity in the Boston TV market.

To be fair, Aucoin’s analysis is no puff piece, as he addresses the challenges facing both NBC Boston and NBC’s ex, WHDH. He also details NBC Boston’s marketing flurry yesterday, from “saturating its airwaves with pointed reminders” of the network’s switch to “a daylong stream of ads spotlighting NBC stars.”

Interestingly, the piece does not mention the major ad bucks that went to the Globe itself.

Crosstown at the Boston Herald, meanwhile, NBC Boston has . . . been dark, running not a single ad to guide Herald readers through the numbers salad the new station is serving up.

This entry was posted on Monday, January 2nd, 2017 at 5:23 pm and is filed under Uncategorized. You can follow any responses to this entry through the RSS 2.0 feed. You can leave a response, or trackback from your own site.