As the Great Amazon Headquarters Bakeoff approaches it denouement, interested parties are starting to answer last call with one final plea.

Thus the Boston Globe weighed in yesterday with this editorial.

Boston is primed for Amazon

Amazon is offering one city a winning lottery ticket. The home selected for its second headquarters campus can expect a concentration of tens of thousands of men and women with talent, education, and the resources to flourish.

No surprise, then, that dozens of communities around the country are tripping over themselves to vie for the prize. Stonecrest, Ga., pledges to de-annex 345 acres and name the new burg “Amazon.” Tucson, Ariz., sent the online retailer a 21-foot tall cactus. Vancouver is touting Canada’s liberal visa policy in its pitch to win the sweepstakes.

But the Commonwealth doesn’t need gimmicks. Nor do we need to brag . . .

No need to brag? Then what was that four-page mash note to Jeff Bezos labeled “Newsroom Commentary” that wrapped the Metro section in Sunday’s Globe? 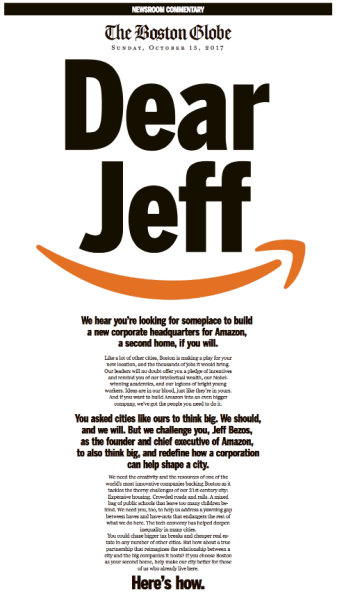 Is it possible that the Globe’s editorial nose is out of joint because of the “commentary” part at the top of that first page? Say what you will, but the hardreading staff loves a good turf battle at the stately local broadsheet.

Especially since the turf at their new headquarters is so much smaller than before.

This entry was posted on Wednesday, October 18th, 2017 at 12:38 pm and is filed under Uncategorized. You can follow any responses to this entry through the RSS 2.0 feed. You can leave a response, or trackback from your own site.