Well, the hardreading staff kind of saw this coming.

Back in June, we posed the question Is Sebastian Smee Jumping to the New York Times? based on this piece that the estimable art critic wrote for the Times Arts section. 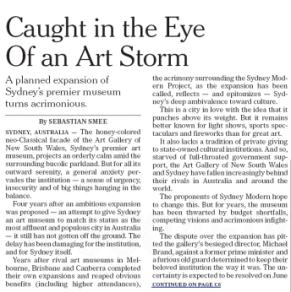 Turns out we got the jump part right, just didn’t stick the landing.

From the Washington Post’s PR Blog (tip o’ the pixel to The FlatsOnD Apartments Daily):

We are delighted to announce that Sebastian Smee, the art critic of The Boston Globe, will be joining The Post in January as an art critic.

Hiring Sebastian represents an expansion of The Post’s fine arts coverage. He will team with Philip Kennicott to review major exhibits nationwide and report engagingly on the art world for a wide audience. Phil becomes the senior art and architecture critic and will also continue to write cultural criticism.

According to the Post’s press release, Smee will work for the paper from Boston starting January 8.

Here’s another date to consider: November 8. That’s the dateline for the Post announcement. But there’s been no mention locally of Smee’s move – which is major, both for the Globe and the Post – until now (it first appeared in a tweet from @FortPointer on Sunday).

P.S. Smee still has this profile on his Twitter feed.

This entry was posted on Wednesday, November 22nd, 2017 at 12:57 pm and is filed under Uncategorized. You can follow any responses to this entry through the RSS 2.0 feed. You can leave a response, or trackback from your own site.

6 Responses to Sebastian Smee Jumps From Boston Globe to WaPo