As the hardtsking staff has repeatedly noted, the Boston Globe can be a bit loosey-goosey about drawing a sharp line between advertising and editorial content.

So we were less than surprised to find this on Metro B2 today. 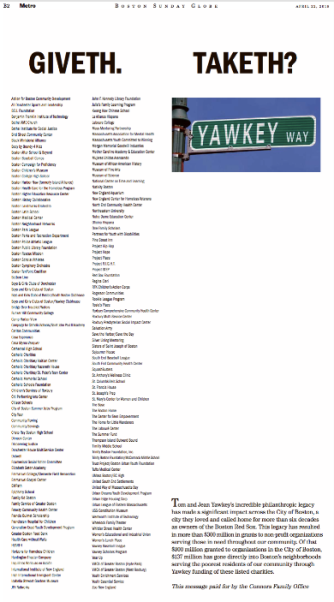 On the left are all the charities given donations by the Yawkey Foundation. At lower right is this body copy.

Here’s the thing, though: On no part of the page does the word “advertisement” appear.

And here’s the other thing: Back in the 1960s legendary adman David Ogilvy postulated that 80% of people read only the headline of an ad. Fifty years later, do we think more than one in five read the ad’s body copy?

Our kissin’ cousins at Campaign Outsider have a long-running series, Civilians Who Run Full-Page Ads in the New York Times, in which 1) all the ads look more like ads than the Connors one in today’s Globe, and yet 2) all of them are labeled “Advertisement.”

It’s a good guess that Connors didn’t want to spoil the visual effect by having his ad labeled an ad, but the $tately local broadsheet really should have higher standards than that.

This entry was posted on Sunday, April 22nd, 2018 at 1:43 pm and is filed under Uncategorized. You can follow any responses to this entry through the RSS 2.0 feed. You can leave a response, or trackback from your own site.