The rumpus over Cardinal Sean P. O’Malley’s shoddy mail handling features a new chapter today, and the coverage in the Boston dailies finds them in the same church, very different pews. 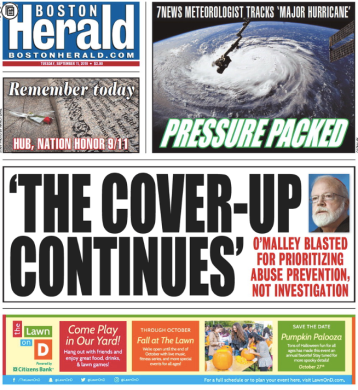 The Boston Globe goes Metro Page One below the fold (and totally buries the story on BostonGlobe.com).

Inside, the Herald gives the story two full pages.

The Globe gives it an 11-paragraph jump. And no critics of O’Malley show up until the seventh of them.

[The Pontifical Commission for the Protection of Minors] members are “trying to make the church the very safest place possible,” O’Malley said.

Mitchell Garabedian, a Boston lawyer who has represented many clergy sex abuse victims, was unmoved by O’Malley’s remarks.

Just an average day in a two-daily town.

This entry was posted on Tuesday, September 11th, 2018 at 4:20 pm and is filed under Uncategorized. You can follow any responses to this entry through the RSS 2.0 feed. You can leave a response, or trackback from your own site.