So the hardreading staff was working its way through the Sunday papers when we came upon this notice on page 2 of the Boston Globe’s Ideas section. 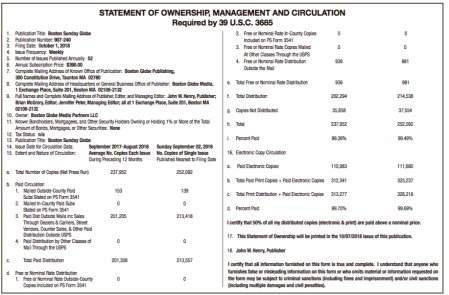 One number that caught our eye was the Boston Sunday Globe print circulation increase from an average of 201,358 last year to 213,557 last month. 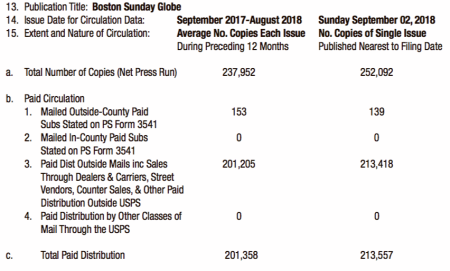 Next item of interest: The Globe’s paid digital subscriptions, which have risen to 111,680 according to this filing.

Problem is, Globe editor Brian McGrory has repeatedly stated that the paper needs to corral 200,000 digital subscribers to ensure its financial sustainability.

So half a loaf doesn’t quite make it, no?

Crosstown at the Boston Herald, on the other hand, the circulation news is downright dismal, as the Boston Business Journal’s Don Seiffert recently noted. 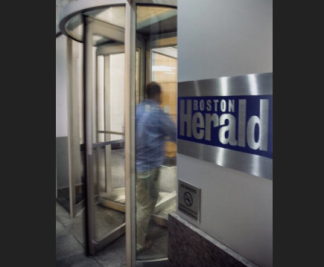 The Boston Herald’s weekday print circulation saw a bigger drop in the first three months of 2018 compared to the previous quarter than it’s seen anytime in at least the past three years.

The newspaper’s weekday average print circulation fell to 40,914 during the first quarter of 2018, according to a report the Herald filed this week with the Alliance for Audited Media.

That’s a drop in circulation of nearly 3,200 subscribers — about 7.2 percent — from the fourth quarter of 2017. It marks the largest three-month decline in the paper’s weekday print circulation since at least 2015.

This entry was posted on Tuesday, October 9th, 2018 at 12:59 am and is filed under Uncategorized. You can follow any responses to this entry through the RSS 2.0 feed. You can leave a response, or trackback from your own site.