The latest round of layoffs at the newspaper includes 10 longtime employees in the classified department, and plans to outsource the “Remembered” business that prints death notices.

Then again, by the look of the Globe’s obituary pages nowadays, you’d think that they’ve been outsourced as well.

Start with Friday’s edition, which featured six obits across two pages – five of them from the New York Times, one from the Associated Press. 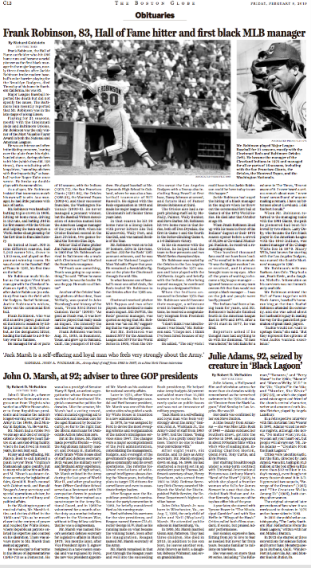 To be sure, you’d expect the Globe to pick up Christine Kay, editor on prizewinning Times projects, dies at 54 from the Times. Ditto for John Dingell Jr., a House ‘bull’ who served the longest, dies at 92.

But also a Times obit for Frank Robinson?

It’s true that Globe death beat reporter Bryan Marquard has had his hands full lately with the passing of legendary WBZ-AM anchorman Gary LaPierre and longtime Globe editor John S. Driscoll. But nobody in the Sports department could compose a sendoff to Robinson, Hall of Fame slugger and baseball’s first black manager? Geez.

Next up: yesterday’s edition of the Globe, which featured five obits – four from the Times (including Albert Finney), one from the Washington Post. Again, no one from the Arts squad had an obit prepared for the 82-year-old British stage and film actor? Double geez.

To be fair, Dan Shaughnessy penned a nice tribute to Robinson in his picked-up pieces column today. Don’t hold your breath for something similar on Finney.

Today’s Globituaries run true to form – four from the Times, two from AP. 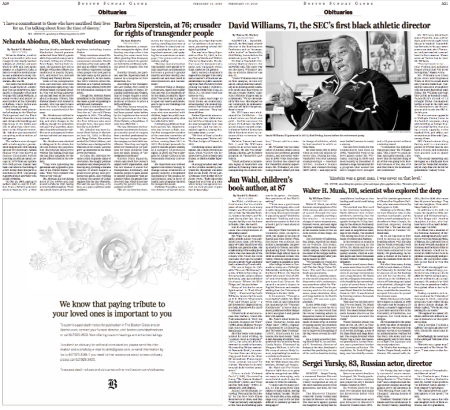 To be clear, it’s no surprise that even a major metropolitan daily would pull most of its obits from the wire services. In the case of the Globe, however, it’s yet another symptom of the slow-motion decline of a once-robust newspaper.

Maybe not newsworthy, but certainly noteworthy.

This entry was posted on Sunday, February 10th, 2019 at 1:14 pm and is filed under Uncategorized. You can follow any responses to this entry through the RSS 2.0 feed. You can leave a response, or trackback from your own site.