In the eyes of some Bostonians, real estate magnate Harold Brown, who died on Sunday at the age of 94, was a legendary slumlord; to others he was a storied landlord and philanthropist.

In the local dailies he was both – but in separate papers.

The first sendoff came in yesterday’s Boston Herald, with the main source for Sean Philip Cotter’s piece being Brown’s rabbi.

Harold Brown, the storied Boston landlord who turned one small apartment building into a sprawling real

estate empire, has died, according to his rabbi. He was 94.

Brown, who retired from his position atop Hamilton Co. at age 93 last year, amassed billions of dollars worth of Boston-area property over more than six decades in the real estate business and created a charitable foundation that gave to local causes.

Today the frothy local tabloid features this piece on the Obituaries page, which described Brown as being “[k]nown for his quick wit, no-nonsense approach and generosity.” But apparently that wasn’t enough hagiography for the Herald, because Howie Carr also weighs in today with this mash note.

Harold Brown was a friend of mine.

He was good to me, my family, and a lot of other people. Talk about up by the bootstraps — his mother was a fortuneteller, that’s how she put food on the table during the Depression. He was a veteran of both World War II and Korea.

When he died on Sunday, at age 94, Harold Brown was probably worth well over $1 billion. He had long ago set up a giant charitable foundation. If you walked through the door of his modest offices on Brighton Avenue with your hand out, chances are, you and your group got taken care of.

The rest of the column is classic whataboutism: Everyone greased politicians, Brown just forgot to delegate his bribery. Hey! – the Kennedys were slumlords too. That 75 State Street scandal? Brown was the victim of Whitey Bulger, not the scammer.

Crosstown at the Boston Globe, Brown’s life is a very different story, although Bryan Marquard’s obit starts off in standard style. 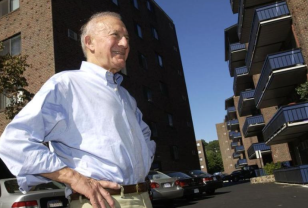 Harold Brown liked to tell the story of growing up so poor that his immigrant mother padlocked the icebox between meals to keep her seven hungry children from pilfering food the family would need for its next meal.

Years later he was faring better. In the mid-1950s, fresh from the success of building a doughnut shop chain, he bought his first rental property — a Commonwealth Avenue apartment building. One purchase led to another as he created a formidable real estate empire that his company estimates at $2.3 billion.

The Globe obit gives a more straightforward recounting of Brown’s legal woes and financial shenanigans, from a federal bribery conviction in 1986 to his 1991 filing for bankruptcy protection when he was $650 million in debt.

But the Globe also gives him his due on the business side (“At one point in the 1980s . . . Mr. Brown’s holdings were so expansive that he estimated he collected rent from one of every 15 tenants in Greater Boston”) and on the philanthropic front, from his establishing The Hamilton Company Charitable Foundation and contributing to Franciscan Children’s to rescuing the Coolidge Corner Theatre and donating a $2.3 million building to house the Fenway Community Health Center.

Taken all together, that’s exactly why you want to live in a two-daily town.

This entry was posted on Tuesday, February 26th, 2019 at 5:14 pm and is filed under Uncategorized. You can follow any responses to this entry through the RSS 2.0 feed. You can leave a response, or trackback from your own site.