In his Sunday Baseball Notes column, Boston Globe reporter Peter Abraham had this to say in one of his bulleted Red Sox observations.

▪ You can, and should, hate the Betts trade. But Sox fans are clearly warming up to Alex Verdugo.

Verdugo had an .875 OPS through his first 38 games, but it’s much more than that. He plays with passion, and after a few fundamental flubs early in the season has become an excellent outfielder. His seven outfield assists lead the majors. There are 23 teams who don’t have as many.

Verdugo also runs out every ground ball regardless of the score and seems genuinely happy to be playing for the Red Sox. There’s a lot to like.

Except, of course, that 2015 business about Verdugo witnessing the assault of a teenage girl by two of his minor league teammates and doing nothing about it. [CORRECTION: It was two women who committed the assault.]

Yesterday’s column was at least the second time that Abraham has put on the pom poms for Verdugo. Here’s what the hardreading staff wrote back in February.

The story has also been all over Twitter this past week. But there was nothing in the stately local broadsheet until this story by Peter Abraham and Alex Speier ran in the Boston Sunday Globe (and was buried on the website). 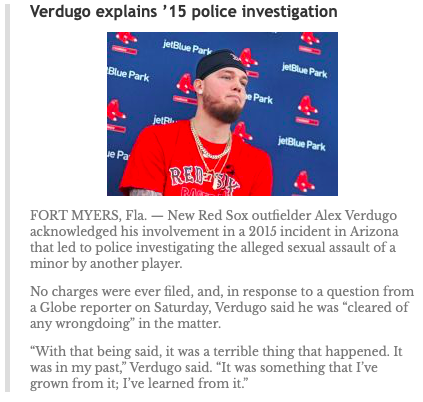 To call that eyewash is an insult to saline solution everywhere.

Especially since it omitted some significant facts, as Jessica Quiroli – who has chronicled the incident in chilling detail on her blog All Heels on Deck – noted on Twitter at the time.

It’s curious that neither one of those pieces by Abraham disclosed John Henry’s dual ownership of the Boston GlobeSox. In fact, very few Globe pieces on the Red Sox include disclosure these days. Even the normally fastidious Dan Shaughnessy, while trashing Red Sox ownership in this piece just up on the web, has dropped disclosure.

And as we’ve previously stated, before you bother pelting us with tweets, a) No, everyone does not know that Henry owns them both, and b) Even if everyone did know, the disclosure should still be in there.

This entry was posted on Monday, September 7th, 2020 at 1:26 pm and is filed under Uncategorized. You can follow any responses to this entry through the RSS 2.0 feed. You can leave a response, or trackback from your own site.