Google’s $15 million Support Local News campaign made its Boston debut today with this full-page ad on A5 of the Boston Sunday Globe. 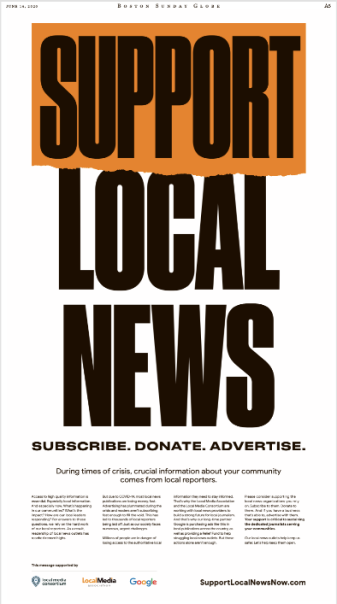 Poynter’s Kristen Hare noted the other day that the campaign’s heart is in the right place, even though its wallet might be a bit slim.

“Support Local News,” from the Google News Initiative, Local Media Consortium and Local Media Association will spend $15 million in ads in local newspapers, their sites, radio, TV and online-only newsrooms in North America for the next six weeks . . .

Google did not say how much each newsroom was getting. But let’s say there are 3,000 of them and they’re each getting an equal amount, that’s about $5,000 each.

That’s likely not enough to prevent layoffs, furloughs, pay cuts or to save a newsroom on the brink of closing. But it does set an example for brands and advertisers to invest directly into local news, Fran Wills, CEO of LMC, told Poynter.

So far at least, the Boston Herald is not one of the lucky newsrooms. So the headscratching staff sent this message to the Googleniks:

“[We’re] curious why you ran a full-page ad in the Boston Globe today but nothing in the Boston Herald. Given that this is one of the few two-daily towns left, one would think you’d look to support both local papers. Any particular reason you’re not?”

We will, as always, keep you posted.