From our Dueling Excerpts desk

For the past three days, the Boston Herald has been excerpting columnist Howie Carr’s new book Rifleman: The Untold Story of Stevie Flemmi, Whitey Bulger’s Partner.

(The hardreading staff suspects that lots of the book is Carr’s Already Told Story of Stevie Flemmi, but we can’t say for sure since we have no intention of actually reading the book or the excerpts.)

Regardless, today’s Herald features the final excerpt in the three-part series:

FBI always had a place for the thug

Gangster Stevie “the Rifleman” Flemmi is due in Boston in June to testify in his longtime underworld partner Whitey Bulger’s federal murder trial. In today’s excerpt from my new book, “Rifleman,” based on Flemmi’s 2003 confession, he details some of his dealings with corrupt FBI agent H. Paul Rico:

When they first met in 1958, Rico was a young FBI agent and Flemmi was an up-and-coming hoodlum. Pretty soon they were, you might say, thick as thieves.

Previous excerpts include this: 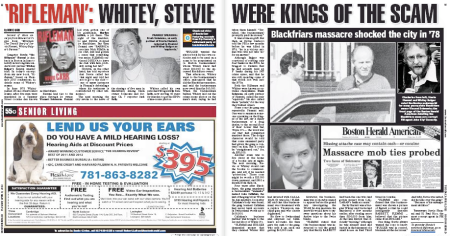 All three come in the wake of the Boston Globe’s relentless promotion of the Kevin Cullen/Shelly Murphy book Whitey Bulger: America’s Most Wanted Gangster and the Manhunt That Brought Him to Justice. From the Globe’s February 10 front-page advertorial:

A window into Whitey’s brutal life and mind

New biography traces Bulger’s rise, reign, and the reckoning ahead

As he sits brooding in his drab cell awaiting trial, South Boston gangster James “Whitey” Bulger is telling friends that while he feels tortured by his cramped captivity, with its isolation, strip searches, and dismal food, he is ready and eager for “the big show” — the trial where he will defend his sense of honor if not exactly his innocence . . .

Bulger’s generous view of himself, not as a cunning killer and cynical informer but as a criminal with scruples and a kind of noble romantic, is detailed in a new and comprehensive biography of Boston’s most infamous criminal, to be published this week. Also detailed are all the reasons not to accept his self-serving self-portrait, from his long and murderous career as a gangster to his well-documented history of providing information to the FBI.

That would be Cullen and Murphy’s book, which was not only flogged on the Globe’s front page, but in numerous fiull-page ads like this as well:

The hardguessing staff’s conclusion: The Cullen/Murphy book will do a lot better than Carr’s cut ‘n’ paste job.

We’ll leave it to you to check the Amazon numbers.

This entry was posted on Wednesday, April 10th, 2013 at 6:35 am and is filed under Uncategorized. You can follow any responses to this entry through the RSS 2.0 feed. You can leave a response, or trackback from your own site.

One Response to Whitey Wars in Local Dailies