Today’s local dailies have – wait for it – very different takes on the disposition of suspected Marathon bomber Tamerlan Tsarnaev’s body.

Start – where else? – with the Boston Herald’s front page: 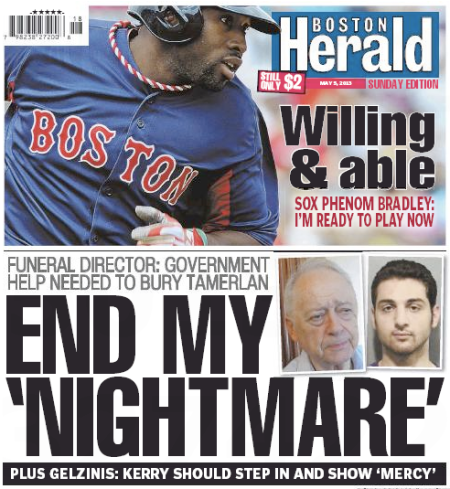 Inside you get a twofer: this Peter Gelzinis column and, more notably, this news report:

‘This is a nightmare’

A Worcester funeral home director is pleading for government officials to use their influence to convince a cemetery to bury Boston bombing suspect Tamerlan Tsarnaev, but so far no state or federal authorities have stepped forward to help out.

“We have a body for burial that has caused a lot of controversy and we can’t continue to play this game,” said Peter Stefan, owner of the Graham, Putnam and Mahoney Funeral Parlors. “Under normal circumstances, the government would say it’s (the funeral parlor’s) responsibility to find a place for burial, but this is not normal circumstances. This is a nightmare.”

Okay. But crosstown at the Boston Globe, we get a very different Peter Stefan, in this case well into a piece headlined “Bombing suspects body to undergo 2nd autopsy.”

“This ends Monday,” Stefan said. “We will find a cemetery by the end of the day Monday.”

Stefan said he was determined to give Tsarnaev a proper Muslim burial in a cemetery with what he referred to as a designated Muslim section . . .

“If they had asked me to bury Adolf Hitler, I would have buried him,” Stefan said. “It’s what we do.”

Wow. Just imagine what the Herald could have done if Stefan had given that quote to the feisty local tabloid.

Then again, the story’s young. Let’s wait for it.

This entry was posted on Sunday, May 5th, 2013 at 3:44 pm and is filed under Uncategorized. You can follow any responses to this entry through the RSS 2.0 feed. You can leave a response, or trackback from your own site.

2 Responses to Two Funerals and Awaiting