Here’s Your Hat, What’s Your Murray?

The local dailies have very – all together now – different takes on yesterday’s swan song for Lt. Gov. Timothy Murray. 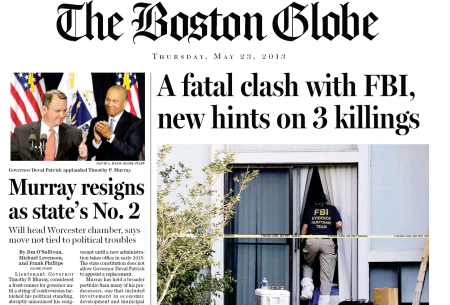 The Boston Herald gives it all of Page One: 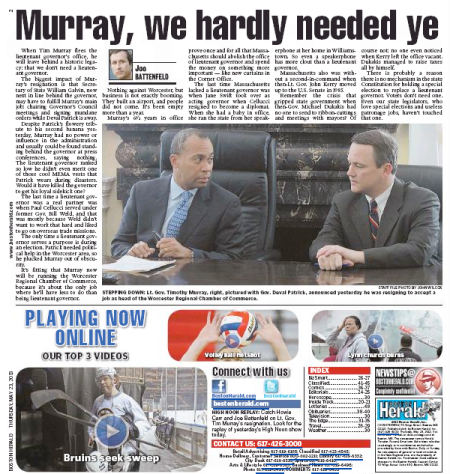 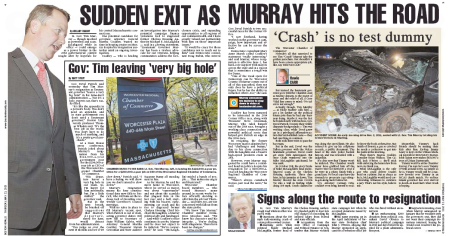 Never one to disappoint, the feisty local tabloid features all the usual aspects in today’s coverage, starting with Joe Battenfeld’s batting Murray around:

Despite Patrick’s flowery tribute to his second banana yesterday, Murray had no power or influence in the administration and usually could be found standing behind the governor at press conferences, saying nothing. The lieutenant governor ranked so low he didn’t even merit one of those cool MEMA vests that Patrick wears during disasters.

Next up, Howie Carr mails in his balding retreads:

‘Crash’ is no test dummy

The Worcester Chamber of Commerce?

Nobody’s all that surprised to see Tim “Crash” Murray take the golden parachute. But shouldn’t it have been a more appropriate job, like, say, with NASCAR?

As you’d expect, the going-away party is a lot more subdued crosstown at the stately local broadsheet. In addition to the straightforward Page One piece, there’s this sober-minded assessment from op-ed columnist Joan Vennochi:

IF ONLY there were no mysterious car crash.

If only he weren’t embroiled in a possible fund-raising scandal.

If only Governor Deval Patrick resigned and left the job of acting governor to his lieutenant governor, Timothy P. Murray could be the Democrat to beat in 2014.

Murray’s ambition — always grander than his profile — felt more delusional as time and controversy dragged on.

Even the boyos at the Herald would agree with that, yeah?

The announcement Wednesday that Lieutenant Governor Timothy Murray will resign to lead the Worcester Chamber of Commerce mainly served to ratify what most on Beacon Hill basically knew: that his recent political scandals had left him without a path to higher office, while his current duties were too limited to sustain an ambitious person’s career.

That level of understatement, however, is entirely missing from the Herald’s editorial today:

Lt. Gov. Tim Murray yesterday gave the people of Massachusetts his two-week notice, thus drawing a curtain on one of the most underwhelming tenures of a statewide office-holder in recent Massachusetts history. And that’s saying something.

Murray is trading the privilege of elected office for what amounts to a bigger salary and a shorter commute, resigning with nearly two years left in his term to accept a lucrative job as president of the Worcester Regional Chamber of Commerce.

Now, we aren’t particularly sorry to see Murray go but we happen to think elected officials shouldn’t throw over the voters simply for the favor of a fat paycheck.

Wait a second . . . the Herald spends all this time saying Murray was a useless slug in a worthless job, but now he should have stayed?

The hardreading staff will be at the chiropractor’s if you need us.

This entry was posted on Thursday, May 23rd, 2013 at 4:46 pm and is filed under Uncategorized. You can follow any responses to this entry through the RSS 2.0 feed. You can leave a response, or trackback from your own site.

3 Responses to Here’s Your Hat, What’s Your Murray?