There’s some serious co-branding going on at the Boston Herald these days, where the Suffolk University logo is on the feisty local tabloid like Howie Carr on a Bay State solon.

For starters, there’s the Suffolk connection to the Herald’s weekly Press Party webcast, the underdog half of the Great Boston MediaWatch Dogfight with WGBH’s Beat the Press. Here’s the ad from today’s paper:

And here’s how the webcast’s background looks: 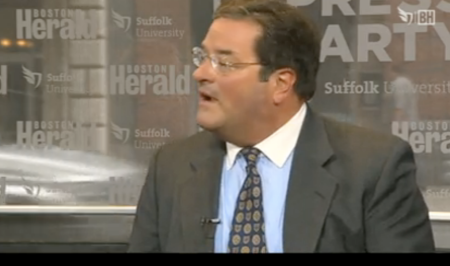 Suffolk even gets part of the bug for video packages:

In the Herald itself, Suffolk’s VP of Whatever John Nucci now seems to have his own column:

But there’s no tag or ID for Nucci, just the Suffolk logo.

Wait – there’s more. Nucci also turns up in Press Party packages, just to round things out.

The Nucci column, it turns out, is part of this initiative, which the Herald announced a couple of weeks ago.

Herald, Suffolk U. set to give voters a lesson in city politics

Suffolk University and the Boston Herald are joining forces to provide the most comprehensive multimedia coverage anywhere on this year’s milestone race for mayor of Boston.

The university, which already teams with the Herald on the weekly “Press Party” media analysis Web show, brings to the table an array of important tools for voters who want cutting-edge coverage of the mayoral battle.

Those tools includes polling and blogs and Nucci and stuff. So that’s a lesson in something.

But . . . is it just us, or is this a bit much, considering that the Herald is supposed to be sort of covering Suffolk University?

Not to get technical about it.

This entry was posted on Friday, May 24th, 2013 at 7:23 pm and is filed under Uncategorized. You can follow any responses to this entry through the RSS 2.0 feed. You can leave a response, or trackback from your own site.