Battle of the Bulger (Rat-tat-Ptooey Edition)

The Boston Herald goes all news noir in today’s edition, starting with its Page One “Whitey and Crew in Their Lair” collage. 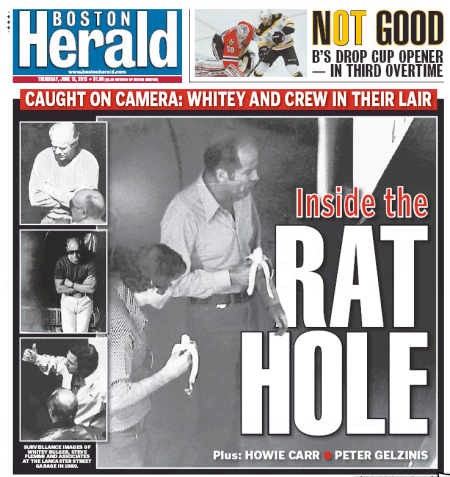 (Just checked – Whitey and Crew aren’t on Pinterest yet)

Inside we get this rogues’ gallery of State Police surveillance shots.

One place the two dailies do intersect, though, is in these dueling columns. 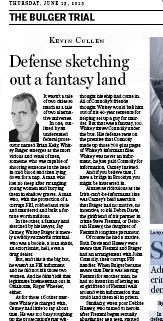 Both columnists paint Bulger’s lawyer, Jay Carney, as a man trying to lead the jury down the garden path by contending that Bulger was just a crook, not a murderer or an informant.

“Jim Bulger is of Irish descent and the worst thing an Irish person can do is become an informant.”

There’s not enough space in the paper to refute that one. So how about this one?

Then why are we the taxpayers picking up the tab for this “indigent” 83-year-old defendant?

It is obvious the defense strategy is to acknowledge that Whitey was a top echelon criminal but to refute any suggestion that he was a top echelon informant for the FBI who used his status to allow him to murder and maim with impunity.

Of course, that plays to Whitey’s grossly inflated view of himself. He was a millionaire! Admire his asset acquisition skills! He got an FBI agent to feed him information about criminal rivals and honest law enforcement efforts to nail him. Admire how he read Machiavelli and took those lessons to heart!

It’s classic Whitey: I’m the smartest guy in the room, and the rest of you are a bunch of rubes who just fell off a turnip truck.

This entry was posted on Thursday, June 13th, 2013 at 5:10 pm and is filed under Uncategorized. You can follow any responses to this entry through the RSS 2.0 feed. You can leave a response, or trackback from your own site.

One Response to Battle of the Bulger (Rat-tat-Ptooey Edition)